After around 40 years of being mothballed, a mine was reopened in Niederschlag near Oberwiesental in Germany at the beginning of November 2013. Following around three years’ work opening up the mine, the Erzgebirgische Fluss- und Schwerspatwerke GmbH (EFS) started up mining of fluorspar and heavy spar (baryte). Plans had already been made and exploration studies completed back in the GDR in the 1960s, but these plans were never realized on account of the unavailability of suitable technology and the low content of the recoverable minerals. The reserves of over 3.5 million t raw spar estimated at the time were classed as a “reserve deposit”. But now, as prices on the raw materials markets worldwide are rising (currently 450 US$/t finished product, 10 years ago 150-160 US$), the deposits in the Erz Mountains have become interesting again for mining companies, thanks especially to the successful technological research conducted in the meantime and in the hope that a certain independence from corresponding imports can be gained. “We want to make industry aware of indigenous raw materials and show that it is now worth mining again in Germany”, exclaimed Prof. Dr. rer. nat. Wolfgang Schilka, one of the two Managing Directors of the company at the celebrations to mark the opening. So far around 25 million € have been invested in the mine including the processing plant. EFS is expecting a lifetime of 25 to 30 years, production reaching around 80 000 t in the first year and rising to around 135 000 t/a in the following years. Then Niederschlag with its around 35 employees will be the second spar producer in Germany after the “Clara” mine in the northern part of the Black Forest. A special feature of the mine is that a 65-m-long and 14-m-high processing plant (optical sorting and air-jet sieving) for primary sorting of the material has been installed in two caverns underground. Thanks to this, there will be no new spoil heaps in Niederschlag, the spoil will be stored intermediately underground and later used to backfill the excavated cavities. “That makes sense as the spar content ranges between 60 and 70 % and so a relatively small amount of dead rock is produced”, says Managing Partner Dr. Peter Koch. The material is further processed at Nickelhütte Aue GmbH, the main shareholder of EFS, before the processed spar goes for sale to Fluorchemie Dohna GmbH in Dohna near Dresden for refining.

A detailed report is scheduled to be published in AT Mineral Processing. 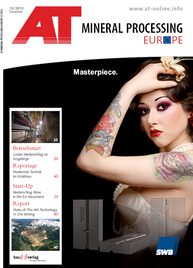 The opening up of a new mine in Germanys Erzgebirge (Ore Mountains) in late 2013 marked a milestone for German mining, continuing the tradition in this region, following decades of stasis. The...

Lucrative deposits in the Erzgebirge

The public was already informed about the opening-up of a new deposit and the erection of a mine at Niederschlag near Bärenstein in the Erzgebirge in the lecture room of Terra Mineralia at the...

Dear Readers The year ends with a piece of good news. In the past decades, the extraction of mineral raw materials in Germany was mainly related to the coal, potash, salt as well as the rock and...

Symposium on extraction and processing of fluorspar

On 20 June 2014, the symposium Innovative extraction and processing technology for fluorspar with reference to the Schoenbrunn and Boesenbrunn deposit will be held in Freiberg. Focus of the...