Hardly any other landscape in Germany has been shaped by ore mining like the Erzgebirge (Ore Mountains) in Saxony.  This region has been ‘married’ to mining for more than 800 years. When, according to legend, merchants found silver in the wheel tracks of their waggons at Christiansdorf, known as Freiberg today, in the year 1168, mining began there and continues to this day. Mining in the Erzgebirge has experienced many highs and lows in its eventful history. The region is known above all for its silver and its four key silver towns: Freiberg, Marienberg, Annaberg and Schneeberg.

But cobalt, tin, copper, lead, bismuth, iron as well as some other metals and minerals have also played a big part in the extraction of resources, as the name “Erzgebirge”, that is ‘Ore Mountains’ already suggests. Even today, fluorspar and barite are extracted and processed. There are currently calls to mine other raw materials there, including tin and rare elements.

Mining has therefore had a huge influence on the entire lives of many generations. This is expressed not only in the technical and economic development, but also in art, culture and religion. Over the entire region there is cultural testimony to the close relationship of art and culture with mining (Fig. 1).

Bound by this tradition, a large number of museums and technical monuments has grown up. And also across the border to the Czech Republic, societies and local authorities have created a unique cultural landscape that is competing to become part of the UNESCO world heritage. Under the name “Mining Cultural Landscape Erzgebirge/Krušnohoří“, the region is in the running to receive this coveted honour.

As part of these efforts, on 6 and 7 June 2015, the “Mining Cultural Landscape” festival was held. At a total of 45 sites, societies and museums invited visitors to learn about the mining tradition in technology and culture over two days. Demonstrations and themed walks gave the visitors a hands-on experience of mining to make it more understandable. Highlights were the underground tours and practical demonstrations such as at the blacksmith’s forge and ore washing (Fig. 2). At such events, it becomes clear to visitors from outside the region how intensive mining has been in the region over such long periods. There is hardly a town or village in the region that isn‘t associated with mining. And if you take a close look at these places, then you will see that many older buildings with mining tradition are still occupied today.

Representative for the many events, the event at the Wolfgangmassen Mine near Schneeberg should be mentioned (Fig. 3). At this station in the Schneeberg-Neustädtler Mining Heritage Trail, an interesting and multifaceted programme was presented here during the Mining Cultural Festival. The first test pits at the Wolfgang Mine were dug in 1555. Silver mining began in 1572. From 1652 to around 1673, cobalt was extracted. Following a dormant period of more than 100 years, cobalt extraction was resumed in 1777 – then already at Wolfgangmassen.

From 1790, the ore was extracted with a horse-drawn winch on an inclined shaft. Only in 1816 to1818 was a stamp mill built with downstream gravimetric processing on longitudinal shaking tables and hand jiggers. Up until then, the extracted ores were not processed directly at the mine. With the development of mechanical engineering, the old horse-drawn winch was modernized from 1855 to1857 and replaced with a turbine-driven winch and 20 years later with a steam-driven winch. In the meantime, the shaft had a reached a depth of 378 m. In the 19th century, in addition to cobalt and bismuth, notable quantities of silver were extracted at certain times. From 1883, the steam-driven stamp mill also built there and the washer were driven with the help of additional steam engines. In 1920, mining at the Wolfgangmassen drawing shaft came to a standstill. Shortly after, ore processing was shut down. After the war, interest focused on prospecting and extracting uranium. The work only lasted a short time, as nothing was found.

Today, the Wolfgangmassen Mine is looked after by Bergbauverein Schneeberg/Erzgebirge e.V, a mining society founded in 1994. Goal of the society is to research the history of mining in the former Schneeberger Mining Office Field and look after the former mining equipment as a living monument for the public. This includes the reconstruction of part of the mine building and the stamp mill with ore washer to fully functioning equipment.

At the festival, the Society issued an invitation to visit the Wolfgangmassen Mine. In an extensive programme organized for young and old, visitors were able to find out about with the life centring around mining and processing. They discovered that actual mining underground was only made possible thanks to many auxiliary trades.

In the blacksmith’s forge it was possible to see how hammers and pickers were made (Fig. 4). A ropemaker invited visitors to try their hand at making their own rope. Members of the Society wearing historical miner’s aprons explained the miners’ different tools (Fig. 5). In two model mines, the life of the miners underground was illustrated. Those who wanted were able to drill their own water pipe from a tree trunk (Fig. 6) as used to be common at many mines. For children and adults it was fascinating to try their hand working with hammer and picker underground with only the light of a Freiberger Blende, a type of miner’s lamp.

A tour of the wheel room underground for those interested gave insights into the wheel chamber in which once the water wheel with a diameter of 9.6 m was housed. This was used to drive the stamp mill and washer. One highlight was the demonstration of the smelting of bismuth in a specially built smelting furnace (Fig. 7). Visitors were able to buy jewellery and souvenirs made of the smelted bismuth.

Especially for the children, it was interesting to have a go themselves at washing fool’s gold (pyrite) in a pan. On the basis of various minerals, the different stages in the processing of ores and minerals were shown (Fig. 8 and Fig. 9). The visitors were able to separate these in a pan and launder. A measuring point for determining the radioactivity (Fig. 10) astounded the visitors by showing how many everyday objects used to be decorated with radioactive substances. Especially ceramics and glass used to be decorated with uranium-based colours which still give off a significant level of radiation. But at no time was there any danger of the visitors being exposed to increased radiation.

In the stamp mill building itself, there was a special exhibition on making tallow and grease for lubricating machines, which was explained by “Butter-Sepp” while making butter from milk (Fig. 11). From a large model of the shafts and the outbuildings, the visitors were able to get an overview of the entire mine site.

Naturally, refreshments were provided at the event, with grilled sausages, bread and dripping, coffee and cake. All in all a successful event, even if with the hot weather on the first day, swimming and paddling in the Filzteich, a manmade reservoir in Schneeberg that originally held water for the water-driven machines at the mines, proved a huge draw.

Anyone interested in a tour over ground and underground should contact Volkmar Müller, Chairman of the Mining Society, on +49 (0)162/4359984. Tours underground are limited to five people on account of the restricted space and can only conducted on prior arrangement. The organizers are already looking forward to the 3rd Cultural Festival in 2016 and expect lots of interested visitors. 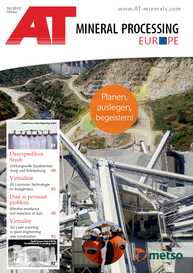 Sachtleben Minerals GmbH & Co. KG has won the Silver Stevie Award in the category of Video (subcategory of the nomination: Corporate Video/Image Film). Producer of the clip entitled The Miner was...

The new large-format mining calendar has arrived  accompanied this year by a highly practical MINI pocket mining note + appointment book!   This is the 26th edition of the Original Saxon Mining...

The opening up of a new mine in Germanys Erzgebirge (Ore Mountains) in late 2013 marked a milestone for German mining, continuing the tradition in this region, following decades of stasis. The...