Recently Velde Pukk and CDE held a three-day demonstration event at Sandnes near Stavanger/Norway, to present the new wet processing plant with a capacity of 300 t/h for construction and demolition waste. More than 70 companies from Norway, Sweden, Denmark and Tunisia took part in the event.

The washing plant for construction and demolition waste was purchased by Velde Pukk in late 2014 and is the first of its kind in Norway (Fig. 1). “We opened discussions with CDE a number of years ago as we see the huge opportunity presented by the recycling of C&D waste to high quality, high value recycled sand and aggregates with a wide range of applications” says Managing Director of Velde Pukk, Egil Velde. As well as processing C&D waste (Fig. 2) received at the Sandnes quarry the new CDE plant is also processing overburden from the company’s hard rock quarry operations at the same site. The CDE project was initially led by Eoin Heron, CDE Regional Director for Europe and Russia and he says that the flexibility offered by the CDE equipment was an important factor in winning the project. “We determined that we could design a plant that would allow them to not only recycle the C&D waste but also to recover material from the overburden which could subsequently be used in their integrated operations.”

The company, founded in 1984, has expanded significantly in the last decade, beginning with the introduction of an asphalt plant at Sandnes quarry in 2006. By 2007 they had built what they say is the largest, most modern and environmentally friendly production facilities for crushed rock processing and asphalt production in the world. This was followed in 2008 by the establishment of a contracting business for road construction and in 2009 a ready mix concrete plant was introduced to the site.

“It is one of the largest mechanical installations that CDE has ever completed and there were some very specific challenges to overcome during the design and delivery phase”, explains Colum Bryson, CDE project manager during the project delivery phase. “Sandnes quarry is a very busy working site so the installation and commissioning phase had to be managed with respect for the essential daily operations of the crushed rock processing plant, the ready mix concrete plant and the asphalt production plant. Thanks to the engagement and commitment of the full team at Velde we were able to not only manage these issues but actually reduced project delivery time by 40 %.”

There were 55 lorries involved during the transportation phase to deliver the new washing plant to Sandnes quarry and due to limitations on space it was essential that staged deliveries were organised. It was also essential that this was done in such a way as to minimise crane hire requirements on site. A concrete pad was constructed as well as a variety of concrete product bays built to facilitate the introduction of the many radial product conveyors on the plant (Fig. 3). The objective was an easier and more efficient movement of site vehicles around the site and a quick, easy and safe access for essential plant inspection and maintenance.

Feed material is first delivered two R2500 primary screening units located side by side and with integrated apron feeders which split the feed across two separate 150 t/h processing lines. From the feed hopper (Fig. 4) material is sent to the R2500 primary screening unit and the +90 mm material is removed via a double deck 5 x 1.5 m grizzly screen. The remaining material is discharged to two horizontal feed conveyors (Fig. 5). The 0-90 mm material then arrives at two AggMax 151 modular logwashers where a pre-screen removes all the 0-4 mm material which is delivered directly to the EvoWash 201 sand washing plant.

After aggressive scrubbing in the two AggMax units the 4-90 mm recycled aggregate to sent to a ProGrade P2-108 sizing screen. The two AggMax machines also include a trash screen at the rear which removes any lightweight and organic contamination from the recycled aggregate product. Any sand liberated during the attrition phase is also sent to the EvoWash sand washing plant (Fig. 6) and ensures maximum product yield from the C&D waste feed.

The ProGrade P2-108 sizing screen (Fig. 7) is from the new Infinity screening range from CDE which includes a patented side wall construction which removes unnecessary weight and reduces the power required to run the screen. The screen is set up to produce a 4-11 mm, 11-16 mm, 16-22 mm and 22-90 mm product all of which are stockpiled using static and radial stockpile conveyors (Fig. 8). The EvoWash sand washing plant produces two grades of sand (Fig. 9): a 0-2 mm and a 2-4 mm. The 0-2 mm product is used in the asphalt production plant at Sandnes quarry while the 2-4 mm product is used in the concrete plant.

The wastewater from the plant is first delivered to an AquaCycle A1500 thickener (Fig. 10) where it is dosed with flocculant. This forces the very fine particles of silt and clay to bind together and sink to the bottom of the tank. Meanwhile, the recycled water overflows the peripheral weir and is stored in a concrete buffer tank before being recirculated to the washing plant.

The sludge at the bottom of the AquaCycle thickener is discharged automatically at certain pressure and is sent to another concrete buffer tank which is fitted with a set of agitators to ensure the a consistent sludge is delivered to the overhead beam filter press. The filter press model specified is one of the largest available and has 169 plates each measuring 2 x 2 m (Fig. 11). These plates press the sludge to remove more water before the filter cake is discharged to a bay below.

“We are currently using the filter cake – which has a dry solids content in excess of 80 % - for the construction of embankments which means that we have eliminated waste from this stage of the process” explains Harald Velde. “Of the 300 t/h feed to the plant the only waste from the process is made up of the lightweight and organic contamination removed during the attrition phase.”

The new CDE plant at Sandnes quarry will divert approximately 600 000 t of C&D waste from landfill every year. Velde Pukk aim to develop the market for recycled material (Fig. 12) in Norway in the months and years ahead through extensive testing and use of material in their own operations. 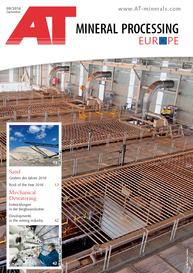 For over 20 years, JPE Holdings Ltd has grown to develop its business of supplying aggregates, groundworks and site clearance, becoming one of the Midlands leading suppliers to the construction...