The K+S KALI GmbH is a German potash mining company with a long tradition and one of the world’s leading potash producer. The Werra Verbund plant with its locations in Hattdorf and Wintershall in Hessia as well as Unterbreizbach and Merkers in Thuringia is the largest site of the K+S KALI GmbH; the facilities in Werra account for about 45 % of the total production capacity of the K+S Kali GmbH. In the Werra valley, the crude salt is mined in a depth of 800 to 1000 m and conveyed to above-ground via ducts. In the factories above ground, it is processed to fertilizers and primary products for various technical and industrial applications as well as for the pharma, food and animal feed industry.

In the different product lines, continuously working scales – among others also – in the form of impact scales are used for the entry of quantities and their allocation. They are subject to increased wear and tear, due to the high throughput capacity, which can amount to 250 t/h in continuous operation mode, the increased material and ambient temperature as well as the ambient conditions.

For this reason, the K+S Betriebstechnik called for a tender for the replacement of the scales at the Wintershall location. The MTS Messtechnik Sauerland GmbH from Olsberg gained the tender and already began to convert the first lines of scales in summer 2014. The project scope included not only the mere delivery of new impact scales, but also the complete installation and re-commissioning. The order also comprised the two transition funnels required between the upstream installed chain conveyors and the downstream conveyor paths to the further processing station. The measurement and the adaptation of the scales including transition funnel turned out to be quite challenging. Moreover, increased demands were placed on the wear protection of the funnel, the scale housings and the actual impact plate.

The material guiding area of the impact scales of the IPW 250 series are made of HB 400. In addition, the impact plate as well as the parts, which are heavily stressed by the product, were lined with ceramics. High corrosion resistance is still required with regard to Kieserit. This results in a special lacquering of the components and in scale mechanics of the impact plates being completely made of stainless steel.

Then, during a maintenance shutdown in summer 2014, the engineers of the MTS were able to completely enhance the old systems and to carry out the new installation of the scales. At the same time, a modernization of the analysis system was due. For this purpose, the ModWeigh analysis systems were chosen, which, via a conventional analogue interface, communicate with the PLS. Access to the operation parameters is possible at any time via additional MW 99 display units.

Now after one year of operation, the scales have already reliably measured a material throughput of several 100 000 t. The impact plates are equipped with a static comparison testing device to enable the control of the measuring accuracy. 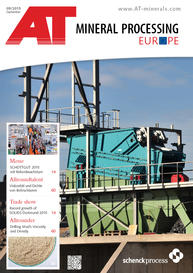 Kassel regional council granted K+S KALI GmbH approval for the discharge of saline wastewater into the Werra for a further eight years, until 31 December 2020. The authority emphasises that potash...

The worlds 8th largest potash producer, the Jordanian firm Arab Potash Company Ltd., is engaging the services of the German engineering and exploration company DMT for a ground survey at the Dead...

For the 13th time DMT is inviting specialists and decision makers from the mining and natural resources sector to discuss current developments in the raw materials industry. Around 300 participants...

Potassium chloride, a fertilizer known as potash for short, is commonly found as a salt mineral and is extracted underground by mining methods. In Germany the crude potash salt often contains...