At the end of 2018, the last active coal collieries in Germany will cease operation. The challenges they leave behind are many and varied – from proper decommissioning and management of any legacies to the recultivation of areas so as to offer good prospects to former mining regions. The focus here is on the so-called perpetual obligations, especially mine water management. The Research Institute of Post-Mining at the TH Georg Agricola University is now launching a major project to obtain more information on how these obligations can be successfully fulfilled in the long term and with regard to environmental impact.The researchers are analysing the rises of mine water in Germany and Europe, which are completed or still underway, to derive from this analysis recommendations for sustainable mine water management in the coal fields on the Ruhr, Saar and in Ibbenbüren. The research project “Evaluation of mine water ascent in the Ruhr district, Saarland, Ibbenbüren as well as in other German and European mining regions” will be funded for three years with up to € 500 000 by the RAG Stiftung

Mine closures are nothing new. “In many German and European coal fields, mining came to an end a long time ago,” explains Prof. Dr Christian Melchers, Head of the Research Institute of Post-Mining: “Mine water then sometimes rose completely unnoticed by the public. The water was either fed via a water drainage gallery into a nearby watercourse. Or the mine water infiltrated aquifers and was discharged at certain points at the surface.

In contrast, the mine water ascent in the coal fields in the states of North Rhine Westphalia and Saarland is, as currently planned by RAG Aktiengesellschaft, to be managed and controlled. The concept foresees a step-by-step reduction in the number of water management sites and discharge of the mine water only into larger rivers in future. This will take the pressure off smaller water courses, e.g. the River Emscher. “To use the extensive, underground system in the mines, the mine water does have to rise – but only to a level that sustainably guarantees a safe distance to important groundwater horizons,” explains hydrogeologist Sebastian Westermann, who is supervising the project.

Overall view of mine water ascent

For the first time the TH researchers are taking a detailed overall view of the rise of mine water that has already taken place in Germany and Europe. “We are analysing the interactions in the deposits and investigating how the mine water has risen in terms of time and space. We are also evaluating how the mine water has changed in quantity and quality. And methane migration and the reactions at the surface are also systematically recorded,” explains Sebastian Westermann. All forecasts made up to now are being reviewed by the post-mining experts in retrospect with regard to their accuracy.

The researchers are hoping for a more in-depth understanding of the principles of ascending mine water. From these they are working out the basic technical principles on the basis of which future risinig processes can be evaluated even more precisely. The researchers are scrutinizing the German coalfields on the Ruhr, the Saar in Ibbenbüren, Aachen, Erkelenz, Zwickau, Lugau/­Oelsnitz, in the Döhlen Basin, in Southern Bavaria and Deister in the Schaumburger Land region. In neighbouring countries, mines in France, Belgium, Great Britain and Poland at which mine water ascent has already taken place or is still underway are included in the study. “Each of these coal fields has an individual formed deposit with specific geological, hydrogeological and mining characteristics,” explains Sebastian Westermann. “Consequently, the concepts and processes of the mine water ascent sometimes differ widely.” To obtain the necessary data, the Research Institute of Post-Mining is working closely with active mine operators as well as the legal successors and responsible licensing and supervisory authorities.

The project is based on a first study on decommissioned coal mining districts (Melchers, Christian & Doğan, Tansel: “Recherche und Bewertung erfolgter Grubenflutungen in Steinkohlenrevieren Deutschlands und des europäischen Raumes” (“Research and Evaluation of Mine Flooding in Coal Fields in Germany and Europe), in volume 14 of the proceedings of the 14. Altbergbaukolloquium, Essen 2014, p. 300-305). 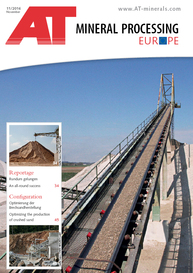 New President of the Society of Mining Professors

The President of the Technischen Hochschule Georg Agricola (THGA), Prof. Dr. Jürgen Kretschmann, has taken over presidency of the Society of Mining Professors/Societät der Bergbaukunde (SOMP),...

A new mine site is being developed near Nowokusnezk: Uvalnaya. Here, four coal seams are to be found in a depth of 100 to 400 m, which are 2 to 3.5 m thick and - this is the essential point - contain...

Preparation plant at Saar Mine

The work for disassembly of the preparation plant at the disused Saar Mine in Saarlouis/Germany, started at the end of February 2013. German RAG Mining Solutions GmbH had previously sold the entire...