At the Kuhn Quarry near Waldhambach at the Pfälzer Wald Nature Reserve, granite and andesite (Fig. 1) have been extracted to produce ballast for many decades. At the quarry, mainly granite is extracted for the production of ballast base and frost protection courses, though some armourstone is won, part of which are used for landscape gardening. In the natural fissures of the andesite, agates, for example, are formed, attracting the interest of dedicated mineral collectors.

Since the physical partition of the fraternal company partnership in 2006, the quarry itself has been facing massive changes (Fig. 2). Willi Kuhn and his son-in-law Stefan Kuhn, who has taken over management since the restructuring of the company, developed a new operating concept and set up a double separate production circuit. For this purpose, two large intermediate storage facilities with tunnels and metering equipment were set up. The aim was to maintain the operating cycles without any interruption – irrespective of whether the primary crusher is being maintained or whether one of the screens happens to be down in the modernized screening facility. Looking ahead and with the purpose of increasing productivity, it was necessary to scrutinize the individual machine components. The aging stationary primary crusher had to make room for a mobile unit, to enable a more flexible extraction process.

In 2008 the operators opted to invest in a mobile Lokotrack LT140 supplied by Metso Minerals (Fig. 3), to which a mobile conveyor, the Lokolink LL, can be connected. Prior to this, the company had been able to convince itself of the efficiency of Metso’s second-largest mobile jaw crusher and then set itself the objective of more flexible production with the new unit and above all directly at the pile of blasted rock. Previously two large excavators and two dumpers worked at the sites to extract the andesite and granite, requiring a total of four operatives. Thanks to investment in a mobile jaw crusher, the company hoped that it could save on three operatives as well as three large machines in the quarrying operation, which were in future to be freed up for overburden and backfilling work. This was initially a very expedient decision as one excavator operator can deal with operation of the Lokotrack at the same time.

2 Stationary feed for a mobile unit

On account of the steep slope and sometimes difficult space conditions, following the acquisition, problems arose with the manoeuvrability of the primary crushing unit. “Especially at the transfer point between the Lokolink conveyors and the crusher, we caused severe damage when we moved the crusher ...” conceded Stefan Kuhn. The machine could not be as employed as flexibly as originally planned in the current extraction situation (opening up of the quarry to the approved final depth). The safety of the operatives and the machine were more important to the quarry operator. The company then invested in a large semi-mobile feed bin as a temporary solution and positioned it on an intermediate level of the quarry (Fig. 4). With the LT140 below and the connected Lokolink belts, the primary crusher is initially set for stationary operation (Fig. 5). But that is to be changed in the foreseeable future: “Once the bottom floor has been reached in around one and half year’s time, the LT140 can fully unfold its full capabilities and feed the stationary belt via the mobile Lokolink belts from there,” Stefan Kuhn plans. Even today the two dumpers can’t supply the material fast enough to fully utilize the crusher capacity. The Lokotrack works in a single-shift operation and consumes just 35-40 l diesel per hour.

The belt weigher at the discharge conveyor measures the daily tonnage, which with hard granite, a full bin and a gap width of around 180 mm, totals around 450 t/h. Apart from the usual crusher tool changes, so far no significant repairs have been necessary. As part of the modernization measures, the Type 1351 Svedala machines operated since 1981 and 1985 are currently being replaced with a Metso HP300 cone crusher. The existing quarrying approval ensures long-term supply of the region with raw materials. It is therefore foreseeable that all mobile machines will get significantly more freedom of movement to permanently meet the company’s business goals. 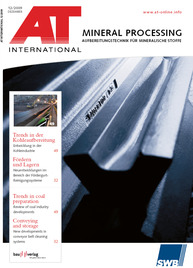 The Prachuap Khiri Khan region of Thailand is well known for producing high quality aggregates, with 4 quarries and 6 concrete plants in operation. Tabsakae Granite Co. Ltd operates a quarry and a...

Scandinavia is known for its hard rock deposits. In the south of Sweden, or the Boda quarry near the small town of Vrigstad to be precise, a particularly hard granite can be found. TJ Gräv AB from...

EvoQuip offers a comprehensive portfolio of products to address the needs of the compact crushing and screening market. EvoQuip are now launching the Bison 280 Jaw Crusher. Whether in Construction &...