Morocco‘s primal mineral resource possessed under its soil is one of the largest in the world‘s reserves, the phosphates. This mineral resource has become in the space of one century a major pillar in its national economy. The Moroccan phosphate deposits were first discovered in the beginning of the twentieth century. In 1920, the industrial exploitation of phosphates had been marked by the birth of the Moroccan Phosphates Office (OCP).

The first edition of SYMPHOS International Symposium, held in Marrakech/Morocco from 09.–13.05.2011, offered an exciting program of meetings and scientific discussions dedicated to innovation and technology in the phosphates sector. Sponsored and organized by OCP, it had been a space for reflection and the exchange of scientific knowledge related to the phosphates sector (Fig. 1). With the quality of the speakers involved, the relevance of the lectures, the workshops and the meetings organized, SYMPHOS had been a major event dedicated to innovation and industrial technology in mining and chemicals of phosphate and its derivatives.

The plenary opening was addressed by Dr. François Guinot, Honorary President of the French Academy of Technologies, contributed to the introduction of the symposium, namely, technology and innovation as the vector of human development. Furthermore, various topics related to the phosphate industry have been presented, such as geological prospection, extraction, benefiacion of phosphates and its various uses including in agriculture and materials. Topics related to phosphate valorisation have also been discussed in depth during the SYMPHOS, including the beneficiation and transformation of phosphates, manufacturing, processing and purification of phosphoric acid and fertilizer production. Experts like Christopher Earl (consultant at KEMWorks Technology Inc.) or David Ivell (Jacobs Engineering) as well as representatives of companies specializing in these areas such as OCP, Simplot, PRAYON, YARA, SNC Lavalin, Wengfu, ­ArrMazz Custom Chemicals, have also been present and active.

Specialists from various areas related to the environment in the phosphate industry presented and discussed new practices in industrial management in order to reconcile the phosphate industry with its environment (Fig. 2). Besides the discussion on the treatment of waste gases entering the atmosphere, technologies for treating smoke and plumes and the management of solid waste, two important topics were also discussed: phosphogypsum and sludge from mining operations. Specialists shared practices tested in various countries in order to provide innovative solutions. Finally, environmental issues had been studied in their entirety, given the cross-cutting issue and its globalization (pollution has no frontiers). Finally the case of climate change and its impact on industrial activities topped the topics addressed.

Topics related to corrosion and materials have been discussed in an oral session at which representatives of large steel companies such as ArcelorMittal, Haynes or Sandvik, had taken part, presenting their latest developments in the field of alloys for the phosphate industry. Secondarily, this theme addressed phosphate materials, or new products based on phosphate. Issues discussed included the use of phosphates in the manufacture of materials for Li-ion batteries, a timely topic and a new opportunity for the phosphates industry. Leading researchers such as Dr. Jackie Ying (Professor at MIT and Executive Director of the Singapore‘s Institute of Bioengineering and Nanotechnology Singapore) and Dr. Gilles Le Flem (Professor, CNRS France) presented their work and their views on scientific materials and nanomaterials based on phosphate. In this theme work, the recoveries of certain products have also been presented (fluorine and its derivatives, ammonium sulphate and iodine) from phosphate or some by-products (fluorosilicic acid, phosphogypsum). Other presentations had been dedicated to phosphate-based products for animal nutrition. Ecophos included an oral paper for this matter.

Reknowned experts such as Dr. Donald Smith (McGill University, Montreal/Canada), James Hendrix (Professor at the University of Nebraska-Lincoln/USA) and Dr. Mike Stewart (IPNI) presented new developments and best methods for a more intelligent use of phosphate in agriculture while emphasizing the key role of phosphates in food safety. The question of the peak of phosphate had also been a keynote, presented by Pierre-Noël Giraud (Economist and Professor at the Ecole des Mines in Paris/France). In parallel with the different oral sessions, thematic workshops brought experts together in order to discuss very highly specialized and topical issues concerning the phosphates industry. Topics such as improving the physical quality of fertilizers, the problem of deposits and fouling in the phosphates industry, or the culture of manufacturing excellence, and safety and hygiene in industrial plants, had been thoroughly discussed and action plans had been proposed.

The schedule of working sessions had been complemented with visits to Benguerir, a city home to an important phosphate mine, as well as to the Jorf Lasfar Industrial Complex. Located on the Atlantic coast, 20 km southwest of El Jadida, the Jorf Lasfar industrial complex started production in 1986. Being chosen for its many advantages, such as proximity to mining areas, the existence of a deep harbor, availability of large reserves of water and availability of land for future expansion, its main activity is the manufacture of merchant phosphoric acid, purified acid and solid phosphate fertilizers (Fig. 3).

In the closing ceremony, Amar Drissi, Executive Vice President and Chief Operating Officer of OCP (Fig. 5), explained OCP‘s impetus in the drive for innovation and thanked every SYMPHOS participant: „We dreamt it, we conceived it - you made it“, he said. He urged everyone to sustain the momentum of innovation in the phosphates sector and continue the spirit of SYMPHOS through other channels. He informed the participants, that OCP has already begun to lay the foundations for the next SYMPHOS symposium, planned for May 2013 and invited them to participate in this important event in the sector. 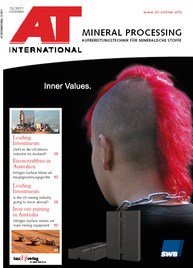 The OCP Group is planning its third "International Symposium on Innovation and Technology in the Phosphate Industry" (Symphos) from the 18th to 20th of May 2015 in Marrakesh. This technological and...

From May 9th to 13th, 2011, Marrakech will host the 1st edition of SYMPHOS, the International Symposium dedicated to future technological innovation in the phosphates industry. This event, organised...

OCP Group is planning its third International Symposium on Innovation and Technology in the Phosphate Industry (Symphos) from the 18th to 20th of May 2015 in Marrakesh, with the theme "Innovation to...

OCP announces the call for registra­tion and papers for the 2nd edition of SYMPHOS, to be held in Agadir/Morocco from the 6th to the 10th of May 2013. The Symposiums 1st edi­tion, ­SYMPHOS 2011,...

SYMPHOS 2013  Innovation and Technology in the Phosphate industry

The 2nd edition of SYMPHOS, the International Symposium on Innovation and Technology in the Phosphate industry, will be held in Agadir, Morocco, on 06.-10.05.2013. After a successful first edition in...