M‌ore and more mines are using drones. Compared to conventional methods, these devices enable completion of more efficient and more accurate data acquisition. They thus help in improving safety management, the acceleration of operating processes and, ultimately, the enhancement of productivity. And, not the least benefit of all, low costs for long-term usage mean that unmanned systems are also financially worthwhile: a survey performed by “Global Data” ascertained that the replacement of manned aircraft with drones makes it possible to save 90 % of per hour costs. In addition, compared to surveying campaigns on the ground, a team of surveyors would need several days to collect the same amount of data that a drone can generate in just a few hours.

The drones in use up to now are referred to as unmanned aerial vehicles, frequently abbreviated to “UAV” (Unmanned Aerial Vehicle). They are steered from the ground by a drone pilot using remote radio control. All depending on their mission and their performance rating, drones may be able to transport payloads or be equipped with cameras and sensors to perform supervision and measurement tasks. In combination with corresponding software, they can supply comprehensive multifunctional data in real time. Since surveys of this type are comparatively cheap and safe, they can be repeated at regular intervals without great expense, enabling engineers to concentrate on evaluating the data collected.

Technical advances in drones, cameras and sensors, on the one hand, and the further development of the legal boundary conditions, on the other, have resulted in an enormous upswing in the drone industry in recent years. The German Aviation Association now assumes that there are in Germany some 400 companies and a total of around 14 000 persons in some way involved with drones. The number of unmanned systems flying for commercial purposes has approximately doubled since 2019, and this trend will continue: at present, only one in nine drones is operated commercially, but this figure is set to rise to no less than one in every three drones by 2025. According to industry experts, the German market will double in volume, to around 1.6 billion €, in this period.

Ever new potential applications for UAV systems are arising, because drones and the data supplied by them are continuously improving. They can be used, for example, to avoid crop failures in agriculture, to assess the damage caused by storms, fire or water, for the inspection of rail lines, power cables and pipelines, for the monitoring of traffic, and for search and rescue missions. And UAVs are being used also, and in particular, ever more frequently in the mining, construction and infrastructural industry: from exploration, via mapping, up to and including automated monitoring and supervision. They generally supply data in a shorter time than is possible using conventional methods – i.e. from the ground, by helicopter, or by satellite and, in many cases, actually in better quality. And, in addition, they are so flexible that even poorly accessible or hazardous locations can be accurately explored. Steep slopes, poor visibility, impassable terrain and dilapidated structures are generally not a problem for drones. Their use during ongoing operation reduces downtimes and repair or reworking times. If UAV mapping is available, ground control points (GCPs) can be omitted.

A high-performance drone fitted with adequate equipment can – in combination with smart software – gather in a single flight so much data that geo-referenced 3D maps and detailed digital terrain models can be drafted. This enables mine operators to determine easily and quickly the precise volume of spoil heaps and of sectors to be mined. In addition, they can perform industry-specific and industry-relevant surveys and measurements, record mass and slope movements, optimise traffic management, and a good deal more as well. Equipped with the corresponding software, they can even generate virtually accessible areas and mark terrain that does not conform to the specifications or is a potential threat. There are, in fact, only few limits set on the potential applications for UAV systems. In certain regions of Central Asia, for example, drones equipped with a gamma spectrometer are used in order to detect and record radioactive contamination in the context of uranium mining conducted in the past.

The use of drones in open-cast mining is made attractive for several reasons simultaneously:

The use of UAV systems results in significant time and cost-savings for surveying/measuring and mapping.

The life-and-limb hazards for employees in poorly accessible or very busy areas are eliminated.

Missions beyond visual contact (BVLOS) permit entirely remote-controlled flights without any need for the drone pilot to be present at the deployment location.

The simultaneous further development of hyperspectral cameras and other sensor systems will, in future, in combination with innovative evaluation methods, make analysis and identification of various materials even simpler.

By providing comprehensive information about on-the-spot conditions approximately in real time, drones also simplify on-site team coordination. In addition, the condition of transport routes can be easily assessed: when other data is then added – distance, slope, bending angles, etc. – these can be optimised and fuel costs reduced. On data-acquisition missions, the drone flies defined flight paths with specified waypoints and continuously records individual overlapping images. These individual images are then geo-referenced and assembled like a mosaic. Extremely high-resolution digital elevation models (DEM, DTM), lattice models (mesh) or true orthophotos can then be derived from the point cloud subsequently generated and can be evaluated by mensurational means. Typical applications can be found, for example, in calculation of the area and volume of masses of soil, for example, among other functions.

Unmanned systems also assist in the high-effort management of spoil heaps: automated surveillance by drones signifies here an enormously reduced burden. These missions can also be combined with underground drone operations, in the monitoring of abandoned mines, for example, or in the prevention of hazards in the form, for instance, of flooding or gas emissions accumulation.

What boundary conditions are now needed to assure the success of drone missions in open-cast mining?

As a first step, mining companies should determine which of their routine tasks (surveying, inspection, surveillance) are currently cost-intensive, time-consuming and/or hazardous. These provide ideal mission potentials for unmanned systems. Important for cost-efficient calculation: the more frequently an activity is repeated, the more worthwhile is the use of a drone. Where territory is inspected by helicopter at regular intervals, the use of the drone is practically always cheaper, for example. A charging station located directly at the deployment location can then be erected (space requirements: approx. 3 x 4 m). The drone can then be parked there when not in use and can be charged simultaneously. Flight itself will then be remote-controlled from wherever the pilot of the drone service-provider is situated.

Unmanned aerial systems are complex and their handling requires corresponding specialist knowledge. These tasks extend from flight planning and application for official approvals, via the procurement of the necessary hardware (drone, camera, sensor systems, charging facilities) and software installations up to and including actual flights and the analysis of the data acquired. Here it is advisable to make use of professional service-providers if the results need to be of high accuracy.

The use of unmanned systems in mining thus provides numerous benefits in the form of more efficient processes, improved data quality and the elimination of safety risks. Drones are destined to support work in open-cast mines at numerous locations around the world in the future.

Checklist: When is a „remote“ drone mission worthwhile?

2. Do you currently perform tasks in the air or on the ground at regular intervals which constitute a significant hazard for the life and limb of people?

3. Do you already use drones that, however, necessitate a pilot present at the place of the deployment?

4. Do you have sufficient space for a drone charging station (space requirement: approx. 3 x 4 m) at your deployment location?

Oliver Lichtenstein is Managing Director (left) and Mitja Wittersheim COO of Beagle Systems GmbH. Beagle Systems specialises in conducting long-range flights by drone, for example to monitor infrastructure facilities such as power grids and for transport purposes. Beagle Systems builds all drones for the often very specific tasks itself and offers their use as a service. The company was founded in 2019 and employs eleven people. 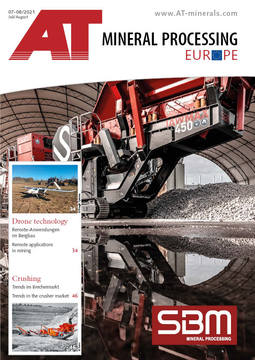 Trends in the crusher market

Managing quarries flexibly, fast and cost-efficiently with the help of drones

T?he idea of deploying unmanned flying objects  the technical jargon being unmanned aerial vehicles  on construction sites or in quarries may have come across as futuristic to many just a few...

According to Timetrics Mining Intelligence Center (MIC), Asian mines are transitioning towards digital mining, as demonstrated by continuing investment in design software and mine surveying. In a...

Dear Readers, There are approximately 3500 dams for processing residues in the mining industry worldwide  and the trend is rising due to the decreasing ore content in the mineral deposits. If...

The CHINA MINING Congress & Expo 2010, hosted by the Chinese Ministry of Land & Resources and the Tianjin Municipal Government, will be held at the Meijiang Exhibition and Convention Center in...