Codelco, Chile’s state owned mining giant, awarded the contract for a large scale conveyor system for their El Teniente mine expansion to TAKRAF (Fig. 1). The system connects a new ore body to the existing processing facilities. In its final stage it will transport primary crushed copper ore at more than 12 000 t/h. Running at 6 m/sec, the 2 m wide belt conveyor system will carry the ore over almost 12 km. The three principal conveyors, one 9000 m long tunnel conveyor and two 1000 m steep uphill conveyors (15°) feed the existing stockpile and in the future a new stockpile (Fig. 2).

The contract also involves the extension of an existing conveyor line. For this it will be necessary to carry out the final tie-in within just a 4 days shutdown. Constructability is therefore of fundamental importance to the success of this project and is incorporated in all design aspects.

With ever increasing energy cost, drive efficiency and conveyor running resistance is becoming more and more important. Codelco has therefore selected direct or gearless drives. The higher efficiency of the direct drive, combined with the variable speed will provide long term benefits to the project. It will also allow the El Teniente operations to run the conveyor system initially at lower speeds to suit the lower conveying capacities in the earlier years of production thus saving power and reducing wear. This will further save maintenance cost. Reduced maintenance combined with its high efficiency and reliability are strong points in favor of the gearless drives.

Even though gearless or direct drives are a well proven technology (mills, hoists etc.) it is relatively new in conveyor design. TAKRAF, in partnership with ABB, has integrated such features within gearless drives which have been standard features for conveyor drive systems for a long time – for example ease of alignment and ease of drive change. The aim has been to reduce the amount of work in the field to an absolute minimum so that a faulty drive can be simply replaced and repaired in the shop. In order to accomplish this the motor is mounted on a special base frame. This also allows the use of standard pulleys – another important feature. The configuration of the direct drive unit can induce very significant forces into the pulleys which have caused considerable problems with pulleys in the past. With the TAKRAF design this has been eliminated!

TAKRAF`s innovative approach has produced a reliable and easy to maintain drive concept combining proven technology with state of the art direct drives. Particularly the long tunnel conveyor has been designed to minimize its running resistance by ensuring accurate alignment through special conveyor frames and the use of low running resistance rubber compound for the belt (Fig. 3).

The two steep inclined conveyors, which in their final stage will be both equipped with four 2500 KW drives, presented some challenges particularly regarding the service of the idler rolls along the conveyor run, which is mainly in tunnels. With idler rolls weighing 45 kg respectively 65 kg manual handling is not only difficult but carries a high risk of injury for the maintenance personnel. For this reason TAKRAF has developed a unique system to service these steep conveyors. A special maintenance cart straddling the conveyor has been designed to minimize the tunnel cross section. It is equipped with a small service crane and runs on rails along the entire conveyor length. The crane is fitted with special lifting frames which pick up the rolls and help to place them in position. The maintenance personnel only need to “manipulate” the rolls, the weight is taken by the crane. The cart can carry spare rolls, all required tools and up to four people. This makes idler roll changes a safe and easy task. 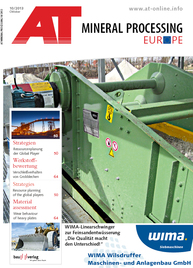 The Siemens Drive Technologies Division has received an order from ThyssenKrupp Robins (Greenwood Village, Colorado, USA) to supply the gearless drive system for the overland conveyor system in the...

T?he Chuquicamata mine, situated in Chiles north, has been in operation since 1915 and is owned by Codelco, Chiles state-owned copper mining company. Codelco is the worlds largest producer of...

Individual belt conveyors in hard rock mining operations all over the world can nowadays extend over distances of up to 16.8 km and overcome height differences of up to 500 m, while normally...

Developed especially for the drives on open-pit mining belt conveyors, the latest fluid coupling technology from Voith  the TurboBelt 780 TPXL (Fig. 1)  provides a lot of benefits. Thanks to the...

Siemens supplies the worlds biggest gearless conveyor drive system to the Cuajone Mine in Peru which is operated by the Mexican mining company Southern Copper Corporation (SCC). The modernization...