T‌he Danish port Frederikshavn is located in the northeastern region of Nordjylland and is the administrative seat of the municipality with the same name, which extends for about 85 km along the Baltic coast to Skagen. It is the most northern municipality in Denmark where North Sea and Baltic Sea come together. The road and civil engineering department Park og Vej is responsible for the municipal traffic infrastructure – about 1000km of roads and 300km of unpaved roads – and is organized as a municipal company, like all other public services like the water, energy and waste sectors.

Besides the maintenance and construction of the road network, recycling of construction waste and excavation bulk is one of the tasks of the approx. 130 employees of the department. Including uncontaminated and contaminated materials from private and commercial suppliers, the annual throughput at the central recycling yard in Frederikshavn and the other collection point in Skagen reaches 15 000 to 20 000t, according to team leader Gert Christensen, responsible for application technology and the equipment fleet at Park og Vej.

Coarse mineral construction rubble (> 20mm) is stored temporarily at their central yard and is periodically processed by a crushing contractor. Another annual 10 000t of soil and excavation bulk are treated using their own processing technology. Until the end of 2018, a mobile 6x2 m drum screen has been in use, but did not sufficiently meet important requirements: “Particularly in the processing of soil containing large amounts of grass and roots, where we have to segregate vegetation as good as possible from soil residues before composting, the efficiency of our drum screen was too low,” explains Gert Christensen the change to horizontal screening technology.

“Green aspects” also influenced the decision to choose the Keestrack K5e mobile scalper. “The municipality of Frederikshavn is committed to protect the environment. When investing in new plants or equipment, we must therefore primarily assess the environmental impact and review the energy efficiency in addition to the technical requirements.” According to Gert Christensen, Park og Vej opted almost immediate for an electric drive concept, but did not want to renounce the flexibility of a mobile plant so the equipment would still be versatile to work on their central yard, the decentral depots or on-site on large construction sites.

“We tested a wide range of offers on the market – the diesel-electric full hybrid plug-in concept from Keestrack seemed to us the most mature. Here, not just an additional engine was built on, but the whole process has been electrified very thoughtfully. In full electric operation, all system functions are available without any performance or functional limitations. In conventional diesel-powered operation, we benefit from the independence of the track-mounted screen with significantly lower fuel consumption and emissions.”

With a weight of around 30 t, the K5/K5e series represents the “mid-range” of Keestrack’s scalper programme, consisting of 6 models. An extensive choice of screen media for the 5000x1500 mm double-deck screen box (effective screen area 7.5/6.75m²) and the hydraulic adjustable screen angle, guarantee a wide range of applications – from highly efficient rock scalping to soil processing with a capacity up to 450 t/h, from screening construction waste to the production of marketable end products in three fractions. Like all Keestrack scalpers, the K5 series is optimized for transport: all conveyors and other components can be hydraulically folded for low-bed transport (transport width 2600mm) – on site, the unit without support legs is quickly operational.

The diesel-electric drive concept reduces peak loads, which are typically encountered by diesel-hydraulic systems, and contributes largely to low fuel consumption in diesel operation (Ø: 7 – 9l/h). This efficiency can be further increased by connecting downstream equipment via the external “plug-out” connection of the K5e – for example the new fully automatic stacker S1e, the dust-suppression technology within the Keestrack program or a high-performance lighting system.

Another positive asset of the highly electrified technology on board of the K5e is the significant reduction of piping and oil volumes of the onboard hydraulics. Approximately 40 % shorter piping with considerable less wear-intensive connections in bending areas (esp. on conveyors) and a significantly smaller oil volume of 235l compared to the purely hydraulic version K5 (370l), resulting in reduced operating and maintenance costs and lower environmental risks.

In December 2018, the Danish Keestrack dealer TNS Imex from Løgumkloster delivered the K5e to Frederikshavn. Until the installation of the power supply at the central screening station on the Park og Vej’s yard, the K5e was operating diesel-powered - since May of last year purely electric. In normal operation, the plant is equipped with 45-mm finger screen in the upper deck and 20-mm square mesh below - for particularly difficult materials to screen, such as the heavily polluted sand of urban sweepers (about 360 t per year), operators change to 40 x 40-mm-mesh below.

The K5e reaches up to 100t/h in the typical soil processing in Frederikshavn. This value varies depending on the material and in particular on the availability of the 4.5-m³ wheel loader which is also used for truck loading. Even in this case, the plug-in electric operation pays off: no diesel fuel consumption during idling and no maintenance-related operating hours – once the “stand-by” is being set by wheel loader driver Peter Bragaard via the radio remote control, the equipment is back in operation speed in no time.

Technical manager Gert Christensen has medium-term consumption evaluations available. As an average fuel consumption in diesel-electric operation, he reports 6.61l/h – an average of 23,15kWh per electric plug-in operating hour, which is documented separately through the controller and optionally through the satellite-based remote monitoring telematics system Keestrack-er. Based on the local fuel and electricity prices, the energy cost savings in Frederikshavn already reach 27 % – even without the public subsidy granted in Denmark for environmental friendly production processes. 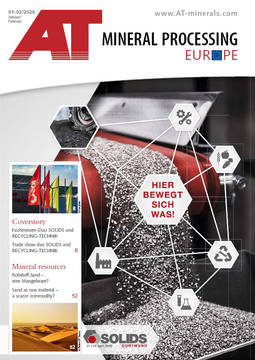 Keestrack introduces the new green electric alternative for their Explorer range of classifiers named ECO-drive. The Explorer 1500 and 1800 (Fig.), both available as 3 and 4 split classifiers, are now...

The Belgium-based Keestrack Group, together with their German distributor Oppermann & Fuss GmbH, will present their latest developments in track mobile crushing and screening equipment at the...

A  innovation to be unveiled at Paris by Keestrack, the   international specialist in mineral processing technology, is a new modern design for its track-mounted impact crusher unit R3/R3e. Thanks...

K?eestrack will display a total of nine processing plants at Bauma 2019 and shows the entire product range of tracked technology for mineral recycling and quarrying. The leitmotif will be the...

Three models which will be on the Hillhead booth of the Bristol based Keestrack partner Molson Group will represent the comprehensive product range of the specialist in mobile recycling applications...