A total of three 1250 HC tower cranes are in use at the “Minera Sierra Gorda” copper mine. Two of these cranes are the 50-tonne version and the third is the 40-tonne version. All three cranes have been mounted on foundation anchors and erected in similar configurations. During the construction phase the cranes are used as classic tower cranes for effective load handling for the assembly of tanks. During this process loads of 14-17 t per component will be handled. In the long term all three cranes will be used as maintenance cranes in the mine.

The extreme geographical and climatic conditions not only present challenges to the workforce but also to the crane equipment. The high temperature differences of up to 40°C between night and day and the dust created by the arid desert climate produce extraordinary stresses. In addition Chile is one of the most earthquake-prone countries on Earth where earthquakes up to a magnitude of 5 are by no means a rarity. This means that all the cranes must comply with a Chilean standard which ensures that they are resistant to earthquakes. 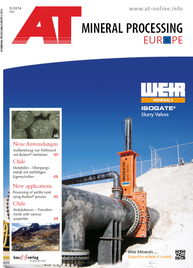 FLSmidth has signed a five-year maintenance contract with the Chilean copper producer Minera Doña Ines de Collahuasi for the supply of maintenance services for their copper plant in Chile. The plant...

Liebherr at the 2011 CONEXPO

At the 2011 Conexpo exhibition in Las Vegas from 22.-26.03.2011, Liebherr will be displaying 23 exhibits representing the latest technology from the vast range of the Groups construction equipment...

ABB announces that it has successfully completed the commissioning of a 13.4 MW gearless mill drive (GMD) system for the Hipogeno project. The GMD powers a 36 SAG (semiautogenous) mill at Carmen de...

ABB announces that it has successfully completed the commissioning of a 13.4 MW gearless mill drive (GMD) system for the Hipogeno project. The GMD powers a 36 SAG (semiautogenous) mill at Carmen de...

The Siemens Drive Technologies division has been commissioned by CAP Mineria to supply the entire electrical system for the Cerro Negro Norte iron ore mine in the Chilean Atacama region. The plant,...