N‌‌‌ot far from Neustadt in Saxony, you will find an impressive quarry. The extraction of mineral resources has a long tradition here. The quarry site was discovered and explored back in the 1920s, and the quarry opened up in the early 1930s. Of course, this was all done with the tools that were available for quarrying rock 90 years ago. Paving stones and cut stones were produced, but also many natural stone products like corbels, surrounds, steps – in those days, everything made from diabase – left the quarry.

However, there was only a small vein of diabase. The main rock is granodiorite. Much later, during the GDR era, great importance was still attached to stone dressing, after all the stones could be exported in exchange for foreign currency. After German reunification, the company was taken over by the medium-sized construction company Sutter and new facilities were built there, including the chippings plant in 1992 with the associated ancillary installation.

In those days, the product portfolio mainly covered road construction, the natural stone side of the business collapsed completely during this time after large volumes of cheaper, more colourful and variegated rock products were introduced onto the market. Today, the chippings plant produces 1 mill. t material per year.

Since 2014, the Oberottendorf quarry has been operated by ProStein GmbH & Co. KG. The very high-quality rock material from the quarry is used primarily for the production of armourstone, high-grade chippings for asphalt and concrete as well as track ballast. In the extraction of the raw materials at Oberottendorf Quarry, first the topsoil is cleared. This is reused in the recultivation of the quarry. Next follows the overburden, which is essentially used only as backfill. Under this lies a weathered layer from which simple chippings are produced. From the underlying blue layer, the armourstone is produced. This exhibits low water absorption so that the armourstone boasts good frost resistance.

From the bottommost layer, the high-grade materials such as high-grade chippings and track ballast are produced. Besides state-of-the-art mineral processing, the quarry is equipped with a state-of-the-art rail loading facility. The A.D.E. Eisenbahnverkehrsunternehmen GmbH, also belonging to Prostein, operates the most powerful single-engine six-axles diesel-hydraulic hauling engine in the world, the Voith MAXIMA CC40, together with its own hauling truck. Customers can be supplied flexibly and over long distances, deliveries go, for instance, to Poland as a far as the Belarusian border, to the western German states or to Berlin.

Mineral construction materials from Oberottendorf are used in many large-scale projects, for instance in motorway construction or the building of industrial estates. A special focus in the product portfolio is on the various types of armourstone. Oberottendorf material has been used, for instance, in construction work at the ship lift in Niederfinow, at the Sacrow-Paritzer Canal near Potsdam or at a major STRABAG project in Eberswalde.

As explained earlier, armourstone exhibits very low water absorption, However, screening of this material is not easy as the stones are relatively large in size. Screened on conventional machines, the stones can damage to the screens. For 100 000 t/a, a professional screen is needed – especially when the stones are to be supplied in different sizes and also stockpiled. At Steinbruch Oberottendorf GmbH in August 2019 a new rugged TS 1.8 x 10.8 drum screen from Höft has replaced the previously used mobile screen for sizing the armourstone. The drum screen is designed for screening armourstone in the size range 0 – 800 mm at the quarry. In addition, drum screen cleanly separates the stone from clayey materials and other impurities.

The Höft drum screen is fed by means of wheel loaders or dumper trucks via an approach ramp to the feed bin. The feed bin has a volume of 25 m3 for this screen. From the bin, the material is fed by means of a hydraulic reciprocating feeder to the drum screen. The drum screen measures 10.8 m in length, with an inner diameter of 1.8 m. It screens four size fractions and the discharge. The screened materials fall into the respective material bays, are loaded by wheel loaders and transported off-site. The screening of the individual size fractions were specified by Steinbruch Oberottendorf GmbH as follows:

At customer request, excellent niche products can be put together from the different size fractions during loading.

The screen has a total weight of 135 t and achieves a throughput rate of 350 – 450 t/h depending on the type of rock and its condition. “We acquired the Höft drum screen so we could better meet the demand for various types of armourstone,” explains F. Grosser, Technical Director at Steinbruch Oberottendorf GmbH. “The drum screen has proven very efficient in operation, we are very satisfied with our new acquisition,” Grosser sums up.

Höft drum screens are in operation worldwide with a feed rate currently to 1200 t/h. They are also used in processing spoil heaps and, with downstream primary crusher at the discharge, they are deployed for cleaning and primary sorting of materials before these are crushed. 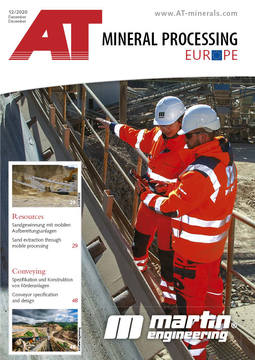 From the extraction areas around Rotzloch near Stansstad/Ennetmoos on the Vierwaldstätter Lake/Switzerland, high-grade rock materials have been extracted for generations. From this material, the...

From ballast to primary rock flour

Diabase has been selected as Rock of the Year for 2017. What sets this rock apart is its versatility. It is just as much in demand for sculpting and ashlar production as for producing high-grade...

W?hether excavated earth, sand, gravel, C&D waste or top- ?soil, Komptech drum screens can be used for these difficult materials without problems. Based on its long experience, this Austrian-German...

Bogaevsky Karyer is a relatively new aggregates production and quarrying company with operations located not far from Oreshki village in the Ruzsky District of Moscow Province. Centered on the...