In 2018, global exploration budgets for non-ferrous metals increased by 19 % to approximately US$ 10.1 billion (bn) from US$ 8.5 bn in 2017. This is the result of an analysis of the investments made by 1651 mining companies, carried out by S&P Global Market Intelligence [1]. The increase was triggered by so-called battery metals such as nickel, cobalt and lithium, and also in particular by the high demand for gold and for the base metals copper and zinc. As in previous years, Canada has the highest investment budgets of US$ 1.44 bn (14.3 %) in 2018, which was an increase of 31 % over 2017. Australia takes second place with US$ 1.33 bn (13.2 %), while the US accounts for more than US$ 0.8 bn (8 %). Gold exploration accounts for more than 55 % of investment expenditure in each of these three countries.

2 The mining industry in Canada

2.2 Investments by the mining industry

In Canada, investments by mining companies are analyzed by the Ministry for National Resources (NRCan). Fig. 2 illustrates the evolution of exploration expenditures from 2014 to 2018 with updated figures for 2018, depicted in accordance with type of mining company. The figure shows the slump in exploration budgets to Can$ 1.629 bn in 2016 and the rapid increase in 2017 and 2018 to Can$ 2.360 bn. Another prominent feature is the growing proportion of so-called junior miners in recent years. Junior miners are mining companies that place their particular emphasis on exploration and investigation, but not on the actual extraction of metals. A striking number of such companies are only concerned with one metal, such as gold, and have only a small portfolio of exploration projects.

Fig. 3 shows the exploration expenditures in Canada in 2018 for the most important commodities. The greater proportion of these expenditures – Can$ 1.504 bn or 64 % of the total outlay – went on precious metals such as gold and platinum group metals. Base metals such as copper and nickel follow with Can$ 0.366 bn or 16 %. Taken together, all the other commodities account for only 20 % of the expenditure, with iron ore mining at 1 % and uranium at 5 %. Diamond mines account for 4 %. However, exploration expenditures, coming in at 16 %, account for only a fraction of the total budget of the mining companies, as depicted in Fig. 4. The major proportion is devoted to equipment investment at 48 %. Even the spending on maintenance and repair, at 20 %, is higher than the expenditure for exploration.

Fig. 5 shows the mining companies‘ budget for 2018 split up into provinces. More than 80 % of the total is spent in the 5 provinces of Quebec, Ontario, British Columbia, Saskatchewan and Nunavut. Quebec leads with a sum of Can$ 3.57 bn, or 24 %, ahead of Ontario with Can$ 3.23 bn or 22 %. Of the remaining 6 provinces of Newfoundland and Labrador, Nova Scotia, New Brunswick, Manitoba, Alberta, Yukon and the Northwest Territories, more than 34 % is accounted for by Newfoundland and Labrador alone, while Yukon and the Northwest Territories are responsible for an additional 28 %, which underlines the importance of the northern, Arctic provinces [3].

2.3 The most important commodities in Canada

3 The mining industry in the USA

The status of the US as a leading economic power generating about one fifth of the world‘s annual income is based on a large and developed national territory which is rich in natural resources [4]. One important factor is the large domestic market (about 329 million inhabitents in 2018; GDP about US$ 19.4 trillion in 2017). The USA is rich in oil and coal deposits and is the world leader in the mining of lead and molybdenum (3rd place each), gold, copper and palladium (4th place each), zinc and platinum (5th place each). It is in 9th place for iron ore and 13th place for nickel. Fig. 11 shows the development of the USA‘s mining industry in the last 5 years. It can be seen that industrial minerals have experienced the largest increase, while metals and coal are going through a declining trend. Excluding the coal industry, approximately US$ 75.2 bn was generated in 2017.

The coal industry in the USA stabilized in 2017, even though it no longer has the dominant role that it enjoyed in previous decades. Fig. 12 shows the mining output of hard coal. This has dropped from 907 million tonnes per year (Mta) in 2014 to 661 Mta in 2016. Support from the Trump government increased production to 703 Mta in 2017. For 2018, further slight increases are expected, resulting especially from growing exports. With electricity generation virtually unchanged, the share of hard coal in power production has fallen continuously right through to the end of 2017 (Fig. 13). After former shares of 56.7 % (1985) and 51.7 % (2000), the share of coal-fired power generation is still 30.1 %. From 2018 to 2020, another 3,422 MW of coal-fired generating plants will be shut down or converted to gas.

Fig. 15 shows the most important metals and the locations of the major mining operations in the USA. A large number of mines are involved in the extraction of gold, silver, copper, molybdenum and zinc. Most of the metal mining operations are located in the Midwest, particularly in the states of Arizona, Nevada, Minnesota, Michigan, Colorado, and Utah. These states together with Alaska account for 88 % of the mining industry‘s economic output (Fig. 16). The three major states are Arizona (31 %), Nevada (30 %) and Minnesota (9 %).

Gold mining output increased from 230 t in 2013 to 245 t in 2017, putting the USA in 4th place in the global ranking behind China, Australia and Russia. Barrick Gold, Newmont Mining and Kinross Gold are among the largest gold producers in the USA. Barrick Gold owns 3 mines in Nevada: the Cortez, Goldstrike and Turquoise Ridge mines (Fig. 17) and one mine in Montana: the Golden Sunlight. In 2017, the company produced 2.4 MOz of gold from its US mines. Newmont Mining owns 5 gold mines in the United States: Carlin, Phoenix, Twin Creeks, Long Canyon and Cripple Creek & Victor, and also holds a 25 % stake in Barrick Gold‘s Turquoise Ridge Mine. In 2017, Newmont Mining produced 2.211 MOz gold in the USA, after 2.024 MOz in 2016 and 1.643 MOz in 2015. In 2018, Kinross Gold produced about 1.51 MOz of gold in its 3 mines Fort Knox (Fig. 18) in Alaska and Rand Mountain and Bald Mountain in Nevada.

In the period 2013 to 2017, copper production in the USA increased only marginally to 1.27 Mta. In 2016, however, a peak value of 1.43 Mta was achieved. The market leader Freeport McMoRan owns 7 open-pit copper mines: Morenci, Bagdad, Safford, Sierrita and Miami in Arizona, and Chino and Tyrone in New Mexico. In 2018, the company produced a total of 0.637 Mta of copper in these mines after 0.689 Mta in 2017. Rio Tinto extracted 0.204 Mta of copper at its Kennecott mine in Utah (Fig. 19) in 2018, which was a 37 % increase on 2017. The increase was triggered by ore mining in a region with higher copper grades as well as by productivity improvements. Rio Tinto, in collaboration with BHP Copper and Resolution Copper, is planning another USA mine in the state of Arizona.

At the beginning of 2019, two acquisitions in the gold sector attracted attention. The American Newmont Mining Corporation is taking over the smaller Canadian rival Goldcorp for a price of about US$ 10 billion. This acquisition will make the North American company the largest gold producer in the world. The new company Newmont Goldcorp has a market value of US$ 28 bn and will produce approximately 7.8 MOz gold in 2019. Newmont Goldcorp will replace Barrick Gold of Canada as the largest company in the gold sector. As recently as September 2018, Barrick Gold had announced that it was buying Randgold Resources, a company listed on the London Stock Exchange, for US$ 6 bn. On January 2, 2019, the combined company went public on the NYSE and TMX exchanges with a market capitalization of US$ 22 bn. 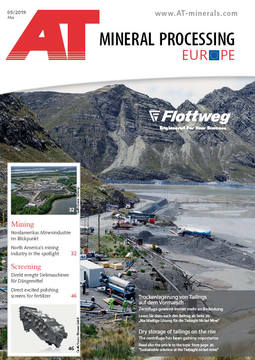 Overview of the mining industry in Mexico

1?Introduction Mexico is the world leading silver producer and is among the TOP 15 countries for 20 other minerals, such as gold, copper, zinc, lead, manganese, molybdenum and iron ore. The country...

At MIN-Expo, FLSmidth and Goldcorp/New Gold, Inc. signed an agreement for engineering services for key technologies for the El Morro gold/copper project in Chile. The asset, El Morro, is jointly...

FLSmidth order for Josemaria copper mine in Argentina

FLSmidth has been chosen to supply the SAG mills, ball mills and cyclones to Josemaria Resources copper-gold project in the San Juan Province of Argentina. FLSmidth will deliver the three gearless...