At the end of 2012, SCHADE Lagertechnik received one of the largest orders in company history: for the new Formosa Heavy Industries steel mill at Ha Tinh in the Vietnamese province of the same name, a total of 21 machines were ordered. This construction site is the largest Greenfield project of the steel industry worldwide. In the first stage of expansion 5 million t of steel will be produced per year. An additional expansion of the production capacity to 10 million t of steel and a final expansion up to 22 million t of steel have already been planned.

The delivery package by SCHADE contains 2 trippers for the coal-burning power plant and 4 trippers for the steel mill with a capacity of 5400 t/h each. Besides the customer will receive 6 semi-portal scrapers with a track distance of 40.7 m (discharge performance: 2200 t/h each). At the steel mill, a portal scraper with a track distance of 48.5 m (performance: 1200 t/h) as well as 2 boom stackers with a performance of 360 t/h and respectively 3200 t/h will be deployed (Fig.). The project will be rounded off by 6 rail-bound conveyor wagons for mobile discharge machines. 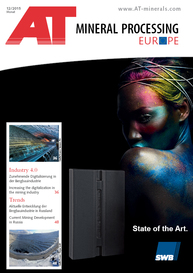 In April 2011 two further AUMUND bunker discharge wagons (BEW) will be delivered to Dragon Steel. The steel producer belongs to the Taiwanese concern China Steel Corporation (CSC). The BEW were...