T‌he Turkish mining company Mikroman, which mines and processes quartz since 1991, set itself the targets of improving product quality and increasing capacity at its three processing plants in Turkey. These goals have been achieved, and other gains made at the same time, by installing four TOMRA high-capacity sensor-based sorting systems.

In addition to being the most efficient way to sort particles, sorting machines deliver a wide range of commercial advantages to industrial mineral sorting businesses. These include a decrease in mining and haulage costs, reductions in energy and water consumption, improvements in quality and productivity, and increases in recovery. Sensor-based sorters also make it possible to significantly increase the lifetime of a mining operation.

In the case of the Mikroman Company, quartz rocks are blasted at open-pit mines. The company runs its own mineral processing plants for crushing, washing and sorting the raw materials. In 2018 the company installed a TOMRA PRO Secondary LASER sorting machine in two of its three plants, in Muğla and Aydin Provinces. The third plant, in Uşak Province, invested in a LASER sorter plus a COLOR sorter (Fig. 1).

TOMRA’s Area Sales Manager, Jens-Michael Bergmann, explained: “TOMRA’s COLOR sorting machines employ a high-resolution camera that recognizes materials based on their color. Rocks with surficial and visible contamination are detected and sorted out, resulting in better recovery rates and higher quality than it is possible with manual sorting. Our multi-channel LASER sorter delivers even greater benefits for Mikroman in achieving the highest purity levels and maximize profits. The scattering effect of multiple laser beams distinguishes a rock containing quartz from its identically colored neighbor. Under the laser beam a pure or non-contaminated quartz rock registers as a glow crystal, whereas similar-looking rocks with no quartz content remain dark, without any visible scattering.”

Of all three Mikroman Mining Company processing plants, the one in Uşak Province demands the most precise mineral sorting. Before sorting, the feed material is screened by size: The 40 – 100 mm stones are treated with a higher priority; stones measuring 20 – 40 mm in size are sent down the sorting line in a separate batch. Here, the combination of a TOMRA COLOR sorter and TOMRA LASER sorter is used to differentiate products according to four predetermined qualities. These are:

White and light grey quartz, with low iron oxide content, for use as artificial stones (A)

Grey and yellow quartz, for use by the glass industry (B)

Colored quartz, for ferrosilicon used by the metallurgical sector (C)

After crushing and washing (through a trommel screen), Mikroman’s sorting process consists of four key steps. In the first step, minerals are screened by size, with only stones measuring 40 – 100 mm going through to the next stage. In the second step, the LASER machine sorts out the waste and colored gravel from the quartz pieces at about 70 t/h capacity. In the third stage, the remaining minerals are sorted into two streams: one for colored quartz; the other for the white and light grey quartz, and the grey and yellow quartz. Finally, these two streams are hand-sorted into product types, with some further removal of remaining gravel and waste (Fig. 2).

These precise distinctions, resulting in higher product quality, were not possible before the acquisition of the TOMRA machines. Nazmi Çetin, Mine and plant Manager at Mikroman, commented: “Before having TOMRA sorters, we were worried about quality and low capacity, but now we have achieved the desired quality standard and we have seen a decrease in waste, which means productivity has increased. The system design is quite successful and the TOMRA service team are good at their job.” 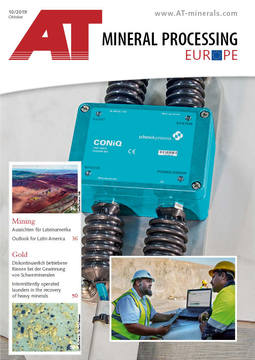 Worlds largest Diamond in over 100 years