T‌his Berlin conference was, again, optimally prepared for the 18 and 19 May 2020 by the organiser, Thomé-Kozmiensky Verlag GmbH, Neuruppin – and then things changed radically. With very great effort and even greater commitment, the publishing house employees were able, with the involvement of a young software corporation, to create in just three weeks the technical infrastructure needed to ensure that the conference would not be cancelled but would, instead, take the form of a webconference. The aim was then to validate tried and proven elements and pursue new routes, as Elisabeth Thomé-Kozmiensky, CEO at the publishing house, expressed it in her speech of welcome. The conference attendees were provided with a plethora of new opportunities: they were able, using an App, to draft their schedule individually and to view information on the individual papers. During the conference itself, live participation online and interchange with the speakers, as well as networking with other participants, was possible. Despite the more complicated conditions, the organisers were able to count more than 200 “attendees”. During an introduction to the agenda, Dr. -Ing. Stephanie Thiel, of VIVIS Verlag GmbH Neuruppin, the programme coordinator, expressed her gratitude to the around forty (four-fifth of the number originally announced) authors for their visual participation in the conference.

The team of Thomè-KozmienskyVerlag GmbH, Neuruppin; first row: 3rd from left: CEO M. Sc. Elisabeth Tomé-Kozmiensky, 2nd from right: Dr.-Ing. StefanieThiel, Program Coordinator
© Sera Z. Curc
The morning session of the plenary event on the first day of the conference was devoted to the topics of the circular economy and climate protection. In his impressive introductory paper on “Climate protection must think internationally”, Prof. Dr. Ernst Ulrich von Weizsäcker, Honorary President of the Club of Rome, made the connection, citing numerous facts of climate protection, mineral by products and waste. He warned urgently against failing to do anything about climate changes. “It doesn’t achieve much, if Germany abandons coal, but another 600 new coal-fired plants are constructed around the world! The only political option to avert the climate catastrophe is the so-called ’budget concept’,” Prof. Weizsäcker is convinced (the same budget of CO2 emissions per capita should be distributed fairly to all countries of the world [editor’s note]).

Other papers dealt with the contribution of the valorisation of domestic-refuse incineration ash and the metallurgical by products, and of landfills, to climate protection, but also the never-ending story of the Substitute Building Materials Ordinance and, thus, the Umbrella Ordinance.

During the afternoon session, the speakers examined the implementation of the EU Circular Economy Package in the German Circular Economy and Waste Act, in particular with respect to the legal significance for the management of mineral byproducts and waste. There was, in each case, a live round of discussions following the individual papers, and involving the speakers, the chairpersons and the public, appearing on the screens.

During the second day of the conference, the video event was conducted, traditionally, in the four following sections:

Residues from the incineration of waste

Byproducts from metallurgy and mining residues

In the individual specialists addresses, the new preparation and plant technologies, and also analytical methods, eco-balance analyses and the production of recycling products were discussed. Attention was also drawn to the significant difficulties in the recycling of new products, such as textile-reinforced concrete, composite materials and asbestos, as well as PCB-contaminated material masses, which the political world usually prefers to ignore. There was also a plethora of information, which was published on the internet or as livestreams, available for the spectators.

It is true that a webcconference can never replace a “live” congress, but the event can nonetheless be considered a success. The excellent organisation and strict chronological procedure made it possible to switch between the individual sections without difficulty during the second day of the conference. The potentials for exchange of opinion in the conference breaks and at the convivial evening event were, of course, sorely missed. But, nonetheless: a major “Thank you!” to the organiser’s team – better a slightly complex and, for participants, somewhat more strenuous video conference than abandoning the event completely. The participants were able, overall, to get information on the latest state-of-the-art. In addition, the majority of the papers have been included and are available in the conference proceedings, in the specialist publication “Mineral byproducts and waste 7 – Ash, slag, dust and building residues”, Thomé-Kozmiensky Verlag GmbH, Neuruppin 2020, ISBN 978-3-944 310-52-4.

The next Berlin conference on “Mineral byproducts and waste” will take place – hopefully again in conventional form – on September 13 – 14, 2021 in Berlin. 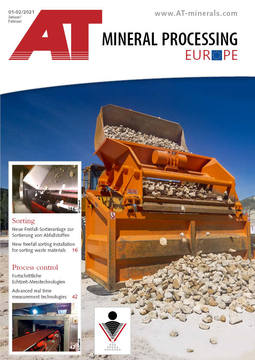 C?EO Elisabeth Thomé-Kozmiensky, of  Thomé-Kozmiensky Verlag GmbH Neuruppin, had the pleasure of welcoming more than 350 attendees to the conference Mineral By-products and Waste on 13 May in...

On 29 and 30 June 2011 experts from recycling companies, from machine and plant engineering, planning offices, universities, administration, associations and other institutions met for the 4th time in...

Framework Ordinance on the home straight?

The third Berlin Mineral Byproducts and Waste conference, held on 20 and 21 June 2016, was awaited with great anticipation, the participants looking forward, in particular, to hearing about new...