Thanks to their energy efficient operation in ball mill classifying cycles and their suitability as classifier heads for jet mills, the new TTD air classifiers have become highly successfully. In 2012, HOSOKAWA ALPINE Aktiengesellschaft launched a newly developed fine classifier with a completely new concept. The TTD ultrafine classifiers are unrivalled in the classifying soft to medium-hard minerals at high throughput rates, for example during filler production. The patented classifying wheel geometry of the turbo twin permits high throughput rates and loading factors at high fineness values of up to d97 = 2.0 μm. The low pressure drop of the TTD makes the system highly energy-efficient. Savings of up to 25 % are possible. The classifying wheel is supported in bearings on both sides and permits extremely high peripheral speeds of up to 120 m/s. Another unique feature is the optimised product routing approach: material is routed directly to the classifying wheel. This prevents any backmixing with the already classified coarse material. It is no longer necessary to adjust the classifying wheel gap, which simplifies maintenance tremendously.

When the team of HOSOKAWA ­ALPINE development engineers designed the TTD series, they were convinced of the series’ viability and potential. Therefore, they developed a prototype 1000 TTD, the largest of the TTD series. In this project, ­HOSOKAWA ALPINE was supported by Calcit d.o.o., Stahovica/Slovenia, a trusted, innovative cooperation partner. On-site installation of the prototype allowed a direct comparison with the existing Turboplex 630/4 ATP/GS multi-wheel classifier, which was connected to a ball mill for the production of ultrafine GCC fillers. The results achieved by the 1000 TTD in terms of energy efficiency and increased output rates were so impressive that Calcit replaced the 630/4 ATP/GS with the 1000 TTD, which has been running smoothly in continuous operation since 2012.

Another project for ASCOM, a key customer of HOSOKAWA ALPINE with a GCC production facility in Minya/Egypt, also illustrates the successful operation of a 1000 TTD classifier in a ball mill cycle. Here, the new 1000 TTD was compared with two existing multi-wheel air classifiers type Turboplex 630/4 ATP/NG. The new ball mill classifying cycle with the 1000 TTD outperformed the existing setup in terms of energy efficiency, maintenance effort and output rates during the production of ultrafine GCC fillers. Today, six TTD systems with sizes 200, 315, 500, 630, 800 and 1000 are available.

In the wake of the outstanding classifying performance of the TTD, HOSOKAWA ALPINE quickly realized that the legendary AFG series of fluidised bed opposed jet mills would also benefit from a combination with the new TTD classifier head. In February 2014, this integration marked the launch of a new generation of jet mills: the TDG series. The new system achieved a verifiable increase in the energy efficiency and throughput rate by 12 %. Today, TDG jet mills are running successfully in the area of talcum and graphite micronisation. Already, older AFG mills have been successfully retrofitted with TTD classifier heads. 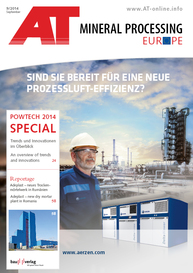 At POWTECH 2010 Hosokawa Alpine presented a Turboplex 315/6 ATP-NG multi-wheel classifier (Fig.) with numerous design improvements. Over and above this, and dependent on the application, a total of...

Hosokawa Alpine will be exhibiting at POWTECH 2013 alongside Hosokawa Bepex GmbH, Hosokawa Micron B.V. and Hosokawa Micron Ltd. Together they will present their range of machines, plants and turn-key...

Hosokawa Alpine continues to strengthen base

Hosokawa Alpine is strengthening its base in Augsburg with investment in a newbuild production hall. On a footprint of 3600 m², new production shops and additional office space will be created. In...