In the late 19th century, the successful extraction of kaolin and the associated boom in porcelain manufacture in the region of Carlsbad (now Karlovy Vary) led to the founding of the company Zettlitzer Kaolinwerke AG, which in 1892 registered the brand name Zettlitzer Kaolin. As the direct successor of the Zettlitzer Kaolinwerke, Sedlecký Kaolin A.s. has its company headquarters near Karlovy Vary in Božicany and now operates as one of the leading Czech suppliers of washed kaolins and kaolin-based products, which are sold primarily to the ceramics, paper and chemicals industries (Fig. 1). Depending on the deposit from which it is extracted, the raw material contains 20-40 % kaolin, which, thanks to its high purity boasts extraordinarily high whiteness up to 85 %. Further, clays and natural sand are contained in the raw material – including around 70 % silica as well as feldspar and mica.

The main component of the kaolin is kaolinite with a fines content averaging 1.2-1.4 µm, amounting up to 90 %. Its high plasticity enables optimum processing in ceramic manufacturing. Being easy to liquefy, the material is ideal for use in traditional casting systems. With a natural aluminium content of 37 % combined with a low content of alkali, Sedlitz kaolin has very good physical-chemical properties for further processing, e.g. high refractoriness and high chemical resistance.

The raw material is processed in a wet process in kaolin washing plants, separated on screens and in hydrocyclones and then cleaned by means of magnetic separation to fine-grained kaolin before being finally processed by means of sedimentation, pressing, drying and grinding to saleable products.

In addition to supplying kaolin for the ceramics and paper industry, at a total of twelve operating sites (Fig. 2) and with just under 500 employees, Sedlecký Kaolin A.s. also produces calcined kaolins and blends, zeolites and bentonites including cat litter, sands for the building and foundry industry, metakaolins for use in the construction industry as additives for concrete mixes, plaster, stucco and paints, earthenware, sanitary and garden ceramics, fillers for paints and varnishes, pharmaceuticals and cosmetics industry as well as kiln furniture, which the company itself uses, for instance, in the calcination of its kaolins.

Focus on modernization and product variety

Following the privatization of the company in the mid-1990s, the company owner Vojtech Zítko invested initially primarily in assuring the supply of raw materials (Fig. 3). Insofar, the company currently has 20 deposits in the regions around Božicany, Podborany, Cheb and Znojmo, only some of which, however, have been developed. The available volume of raw materials amounts to around 100 mill. t. Of this, around 500 000 t are extracted yearly and processed to the above-mentioned products. Other so far undeveloped deposits with raw material reserves of around another 100 mill. t safeguard the future of the company.

For several years, the focus has been on modernization of the company’s production equipment. Since 2012, € 12 mill. have been invested for this purpose. The objective is not only to increase throughput, but improve the quality and purity of the products delivered and effectively utilize the available raw materials. For example, mica, which is regarded as a mineral impurity, is separated during wet processing on Derrick screens (Fig. 4) and is used as filler in the plastics industry or in the production of paints and varnishes.

This also implies the utilization of poorer quality rock from those parts of the deposits that are not suitable as raw material sources for the ceramics and paper industries. In this way, the company was able to widen its product portfolio, e.g. with the calcination of metakaolins as additives for the construction industry. Another successful by-product is cat litter produced from bentonite, which the company has supplied ready for sale in 5- and 10-kg paper sacks on pallets to supermarkets and home improvement stores since 2003.

From raw material to finished product

The processing line in the Božicany plant consists of two production lines with the capacity for processing around 50 to 80 t/h raw material (Fig. 5).

The raw material extracted at the various deposits is delivered to the plant on trucks (Fig. 6) and fed via a metering hopper to parallel-switched impact crushers. In this primary crushing station, the raw material is first coarse-crushed. Then the material is sent on a conveyor to raw material storage, where it is intermediately stored separately by type and grade in five storage bays (Fig. 7). From this point, separated, that is unmixed raw materials can be processed.

Thanks to the separate storage, for downstream processing specific blends of raw kaolins can be made available. Depending on the finished product to be processed, according to technological requirements, the raw materials are mixed with a tractor shovel and fed to the respective box feeder. One feeder is installed for each processing line. The two-line setup of the plant enables the processing of two different types of kaolin at the same time.

The box feeders meter the raw material to a three-stage washing station, which comprises three so-called Bavaria washers per line. After passing the first stage, the coarse and fine material are washed separately. The fine material is processed to saleable kaolin while the coarse material flows to sand classification and further processed to two different sand sizes – 1-4 mm and 0-1 mm. The two sand fractions can be produced separately or as a blend.

The first stage of the washing plant consists of a trommel with paddles and buckets inside for discharge. While the coarse material from this first stage is further dissolved in a long washing machine (Fig. 8), the fine material reaches the third stage of the washing plant and flows finally – like the fines from the first two stages – to three-stage classification in a cyclone system.

In the first classifying stage, hydrocyclones with a diameter of 350 mm are installed. The overflow from this first stage is further classified in a second and third stage. The hydrocyclones used in the second stage have a diameter of 150 mm, and in a third stage hydrocyclones with a diameter of 50 mm are used (Fig. 9). To remove impurities and residues, between the second and third classifier stage, static protective screens are installed. Both the overflow and the underflow of the three classifying stages are then dewatered and dried separately. Before this, however, they can be optionally passed through a magnetic separator (Fig. 10).

The materials are dewatered classically with thickeners and filter presses. Sedimentation of the kaolin sludge in thickeners from FLSmidth, each with a capacity of around 2500 m³ (Fig. 11), is supported with the addition of flocculants. After the actual thickening, the kaolin concentrate is stored in tanks with additional thickening function, and then in holder tanks upstream of the total of eight filter presses supplied by Netzsch (Fig. 12). Here the thickened suspension is dewatered further.

After this, depending on the required quality of the finished product, soda is added in Eirich mixers and then the kaolin body is fed to a sieve kneader, where it is pressed to so-called kaolin noodles. These are then sent to the drying process. The finished kaolin is dried in two three-belt dryers, a single-belt dryer as well as a fluidized belt dryer.

10 % of the kaolin is sent to the calcination plant (Fig. 14). Depending on its purpose, this material is calcined up to 10 hours at a temperature between 800 °C and 1520 °C. The calcining time and the temperature determine the properties of the calcined material, which is then ground again and classified according to the required particle size. For this purpose, back in 2008 the company invested in ultrafine grinding technology from Hosokawa Alpine (Fig. 15), in order to turn the calcined kaolin into saleable products.

90 % of the washed kaolin is delivered in the form of dried noodles (around 10 x 10-30 mm) with a moisture content of around 10-12 %. For other customer-specific applications, the kaolin noodles are ground and dried to ground kaolin with a moisture content around 1 %. The products are delivered both in big bags of 500-1200 kg as well as in valve paper sacks of 25-45 kg depending on the type of kaolin on pallets.

Moreover, the set-up of a new production plant near the old plant in Božicany is a key milestone for the future of the company. The focus at the new plant will be on dry processing, a combination of traditional air and magnetic separation with subsequent grinding is to be used. The goal is finer separation or even finer cut-points in grinding so that in the separation of mica, the concentration can be increased from over 90 % at present to 99 %. The high-quality products to be produced here in future will be sold mainly to the plastics industry, but in the long term, they will also be supplied to the pharmaceuticals and cosmetics industries. 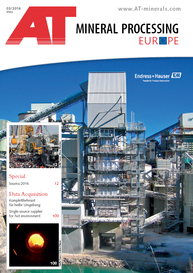 Dear Readers The bauma issue is certainly one of the highlights of the year. Just the scope and weight of the issue are an indication of that. Many companies have participated in our preview and...

In late June 2010, the new Hitachi EX1900-6 was set to work at the quarry of the Hirschau/Schnaittenbach kaolin works owned by Amberger Kaolinwerke. In a cutting and loading operation, the 190-t...

Binder systems based on hydrated or slaked lime Ca(OH)2 have been known since ancient times. Their key features are high permeability and compatibility with limestone and other natural building...