● The cost of washing coal fines (< 2 mm) is higher because of the processes used and the product losses that occur (resulting – as well – in a lower recovery).

● With increased losses, more tailings have to be disposed in a suitable facility.

● Coal that does not meet the customer’s size requirements cannot be sold.

● A lower level of fines in the ROM results in a lower level of respirable and airborne dust, increasing workplace safety and reducing the risk of coal dust explosions.

● Coal fines (< 0,5 mm) have the tendency to retain moisture which causes disadvantages in the downstream processes.

The breakage of coal occurs throughout the process chain, from extraction at the face to the point where it is used. Some of this breakage is intentional, e.g. extraction and crushing, and some is unwanted, occurring when the coal is transported, stockpiled, sized or washed. Generally, breakage behavior greatly depends on the geology, but mining technology offers a chance to affect the amount of fines generated along the process chain. It is of the utmost importance to use this chance and reduce the level of fines to the greatest possible extent.

Wirtgen has conducted several large-scale field tests on material degradation recently. It was found that Wirtgen surface miners offer significant advantages when it comes to the reduction of fines.

A Wirtgen surface miner is a crawler-mounted mining machine with a rotating cutting drum for rock penetration mounted at the center of gravity (Fig. 1). This ensures that the full machine weight of the miner can be transformed into rock penetration force. The cutting drum transfers the material onto a conveyor belt (Fig. 2) from which it is directly loaded onto a dump truck.

The Wirtgen surface miner mines layer by individual layer down to the designated depth. The cutting depth can vary according to the seam thickness. Even thin seams – just 10 cm thick – can be mined and precisely separated from the interburden layers above and below it. In this way, material is selectively extracted from the deposit with a high degree of purity in a cost-efficient and environmentally friendly process, without drilling and blasting.

In one coal mine, Wirtgen surface miners are operating alongside dozers that employ the conventional rip-and-stack method. In view of the current coal prices, the mine was optimizing every step of the operation. This included optimizing the process for target size material, enabling most of the material to be processed in the cheaper coarse circuit of the processing plant. They also were keen on reducing crushing costs. Table 1 shows the plant’s feed size requirements.

The test proved the suitability of the surface miner for this kind of operation once more: The machine delivered coal with a lower fines level and more target size material than the conventional dozer rip-and-stack method (Fig. 3). In fact, out of the 1500 t/h of coal delivered from the dozer to the processing plant, 225 t/h are fines < 2 mm. With the surface miner, it will only be 185 t/h. This means that 22 % less coal has to be washed in the fines circuit and can be washed in the cheaper coarse circuit. Looking at the material < 1 mm, the plant even has to process 33 % less fine material when working with surface miner coal.

The surface miner delivers more than 70 % target size coal (2-40 mm), while the dozer ranges at less than 58 %. Additionally savings are generated in the crushing stage: only 17 % of the material coming from the surface miner has to be crushed, as opposed to more than 26 % when processing dozer coal. This will also result in more fines that have to be processed.

Another trial location was a sedimentary ore deposit that is mined using surface miners and the conventional drill-and-blast method. There, the surface miner was able to continually feed material with a < 1 mm fines level as low as 15 % to the processing plant. The normal plant feed (includes material of drill-and-blast and surface miner operation) contained 25 % and more fines < 1 mm.

Rehandling contributes significantly to the material degradation occurring during the mining process. Simulating the rehandling of material, Wirtgen conducted a study to establish the amount of material degradation that does occur. For simulation purposes, 80 t of material were loaded by a wheel loader and run through a screening plant several times. With every throughput, the amount of fine material increased significantly. During five test cycles in coal, the amount of material < 4 mm increased from 19 % to 26 %, representing an increase of 34 %. A similar result was found with sedimentary ore: the fine fraction increased by 24 % during five test cycles (Fig. 4).

None of the steps in this rehandling simulation (loading, transport to the screen deck, sizing on the screen deck itself) involves the high material stress levels that would be induced, for example, by a dozer moving on stockpiled material. Nevertheless, significant material degradation was measured during the simulation. One can assume that the material degradation that takes place during stockpiling results in an even higher increase of the fine fractions.

Keeping in mind that even this kind of “soft” rehandling causes significant material degradation and that a lot of rehandling steps occur all along the mining process, it is important to minimize the number of rehandling steps. What is more, every rehandling step itself results in additional costs. This is where Wirtgen surface miners offer a two-fold advantage: Material mined with a surface miner has not been blasted, but cut out of the ground by the rotating cutting drum, thus the level of fines is already low. But as the material is loaded straight onto a truck, rehandling is kept to a minimum and thus the level of fines stays as low as possible.

High levels of coal fines in the ROM material result in higher costs for washing, lower recovery, reduced workplace safety and negative impacts on the downstream processes. Knowing where these coal fines come from and optimizing the procedures along the process chain can yield significant savings.

Wirtgen has conducted several studies to address the fines problem and proved that it is possible to reduce the level of coal fines in the ROM: mining coal with a Wirtgen surface miner is a first step toward substantial savings in the process chain. Additionally, operating a Wirtgen surface miner will reduce the quantity of active equipment required to load one tonne of coal by streamlining the mining process. Furthermore, it will simplify the interdependence of process steps in mining operation, reducing costly time losses between the individual process steps. 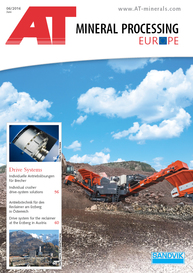 The New Acland Mine (NAC), located adjacent to the township of Acland (Queensland), is part of the Australian based New Hope Group. Since opening of the mine, coal and interburden have been extracted...

More coal for the customer

The first Wirtgen 2200 SM 3.8 surface miner is being used in the Chinese province of Xinjiang. With immediate ­effect, this newly advanced surface miner is replacing the conventional mining equipment...