A member of the Eurocement Group, the mine ZAO Kavkazcement is located near the Black Sea in Russia and is one of the largest cement producers in the Northern Caucasus. In the selective mining of limestone, Wirtgen surface miners guarantee constantly highly daily rates without drilling or blasting.

Since 2005, operations at ZAO Kavkazcement have relied on mechanical mining using the surface mining method. The mining performance of the two 2200 SM – the smallest surface miners from the broad Wirtgen product range – that were initially ordered impressed Eurocement so much that, in 2008, the next larger size was ordered – the 2500 SM. Decisive for Eurocement was that the surface miners should deliver the required mining tonnage with high productivity and at low operating costs, that the material should be reliably crushed within the prescribed gradation, and that the miners should suit the existing mine structures optimally. Three 2500 SM are currently operating in the mine (Fig. 1).

One of the main advantages of surface mining over drilling and blasting is that the limestone can be loaded directly onto trucks by means of a powerful transfer system. Eurocement makes use of further loading methods, however. If, for example, material is required for a temporary embankment stabilization, the surface miners discharge the cut limestone sideways onto a pile. One benefit here is that the cutting process is always entirely independent from the truck loading. A further possibility for material loading is to deposit the limestone as a windrow behind the surface miner without the use of the loading conveyor.

With Wirtgen know-how from highly developed cutting technology, limestone is mined at ZAO Kavkazcement in a highly environmentally friendly manner without drilling or blasting (Fig. 2). Victor Gustov, the Mining Director at Eurocement, sums it up: “The use of surface miners takes a huge strain off the environment during limestone mining in the regions affected – while increasing safety in the mine at the same time.” 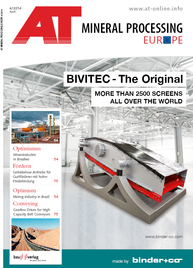 More coal for the customer

The first Wirtgen 2200 SM 3.8 surface miner is being used in the Chinese province of Xinjiang. With immediate ­effect, this newly advanced surface miner is replacing the conventional mining equipment...

M?ine operators for some time now have been increasingly turning to an alternative to conventional rip-and-stack or drill-and-blast coal mining: the use of surface miners. Diverse studies and tests...

The New Acland Mine (NAC), located adjacent to the township of Acland (Queensland), is part of the Australian based New Hope Group. Since opening of the mine, coal and interburden have been extracted...