In June 2012, the Ireland based Ward & Burke company, with a branch office in Canada, commenced its tunnelling operations in the context of the “Laurel Uptown Trunk Sanitary Sewer” project undertaken in Waterloo near Toronto. In total the project comprises the construction of a sewer of 963 m length with a diameter of DN1200 including the provision of lateral drains and terrain surface reconstruction. Manhole spacing for the Waterloo project ranges between 95 m and 180 m with straight-line pipe-jacking. Originally, the conditions of the tender offer stipulated that 50 % of the overall sewer length should be constructed using the cut-and-cover method, while the other 50 % were to be built by applying the microtunnelling technique. As it became apparent that both overburden and ground water pollutant levels measured in the relevant section under construction exceeded legal tolerance limits, 90 % of the overall project are to be built by applying the microtunnelling technique. For executing the Waterloo project, the company uses a Herrenknecht AVN1200 TB that allows access to the face via its central door enabling the operator to change tools. Furthermore, the machine is equipped with a medium-pressure spray system supporting the excavation of material at the tunnel face in cohesive geologies by preventing the cutting tools from clogging.

Ground investigations had already revealed geological conditions embracing “cohesive loam and saturated sand” and required a careful selection of the separation technology put to use. The decision was in favour of a closed-loop separation system offered by ITE – a company based in Wesel/Lower Rhine area – that consists of a TSP300-2 separation plant with a downstream ZR 15046 centrifuge in a 20 ft. container. The “TSP300-2” separation plant in use is a compact, two-stage 20 ft. facility equipped with high-frequency, high performance fine particle screening machines. The first screening machine is fitted with low-wear polyurethane screens with a mesh width of 0.3 mm that may be replaced at any time by multi-layer woven stainless steel screens with mesh sizes of up to 45 µm. The second stage consists of a 2 x 15“ hydro-vacuum cyclone unit mounted above a high-frequency screening machine whose design more or less corresponds to that of the first machine described above.

The “Tunnelling Decanter ZR15046” which is operated in bypass mode represents a highly wear-resistant centrifuge especially tailored to tunnelling requirements. Together with a compact liquid polymer unit, a switch cabinet and a discharge screw, the decanter is mounted in a 20 ft. sea container with thermal and sound insulation. Without the use of flocculating agents, the centrifuge provided by the ITE GmbH can only separate material of up to ca. 6-10 µm, just like centrifuges offered by other manufacturers. If a separation efficiency of up to 0 µm is required, the use of flocculating agents, so-called polymers, is imperative. The following products were put to use for the purpose of the “Waterloo” project: Poly-Plus by M-I Swaco and TK50 by Morission Mud, the former an anionic and the latter a cationic product which were used alternately subject to the respective geological conditions. With the help of the technology employed, it is possible to permanently keep the density of the drilling fluid at a level of between 1.0 and 1.1 kg/m³; as a consequence, even the longest stretch of tunnel measuring 185 m could be driven without a change of water. During the tunnelling operations, the machines advanced an average of 15 m/day with 12-hour shifts. As a consequence, the disposal costs incurred were reduced to a minimum, the economic viability of the project was optimised, while the impact on the environment was kept low.

www.separation.de
This article appeared in 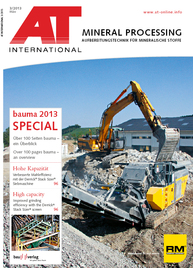