While Germany’s machine and plant engineering sector has been widely and severely hit by the economic and financial crises, 2009 probably goes down as the best in the history of the German mining equipment industry, as Dr Paul Rheinländer, Chairman of the VDMA Mining Equipment Association (Fig.) reported at the press conference of the annual meeting in November 2009. The industry expected a 10-% increase in turnover to around € 4 bill. As reasons for the increase, he pointed out the high level of orders from the previous year and the successful opening of new sales markets especially in Central and South America. For the Central American business, the mining equipment manufacturers were expecting a turnover increase of 110  % to € 55 mill., and in South America of 100  % to € 52 mill. Despite this success, Rheinländer saw “no reason to be euphoric”. In this connection, he pointed out the up to 50-% decline in incoming orders in 2009. However, the sector did not expect that this slump in orders would fully impact sales in 2010. It was regarded more likely that at least part of the orders cancelled in the recent months on account of the economic crises will be re-issued in 2010. The companies therefore hoped to maintain turnover levels in 2010.

For the domestic market, the mining equipment suppliers expected a 10-% increase in turnover to around € 560 mill. last year. Despite the closure of another two coal mines, Dr Rheinländer was confident that the sector would be able to maintain its turnover levels at home in 2010. In Germany, around 800 mill. tonnes minerals are extracted every year. Even if coal mining were discontinued from 2018, the Federal Republic of Germany would remain a leading mining country. A turnover increase in the region of 10  % was also expected for the export markets. Providing the forecasts are accurate, the German mining equipment manufacturers could have landed their highest ever export sales result with around € 3.44 bill. last year. Despite the 35-% decline to € 235 mill., Russia remained the strongest export country. In China, after sales declines in 2008, a 25-% increase in turnover to over € 220 mill. was expected for 2009. In the light of the situation in the USA, Dr. Rheinländer regarded the expected 20-% decline in turnover to around € 165 mill. there as a “good result”. He assumed that the economy there would slowly recover. “Stabilization and positive signals” had been identified almost everywhere. 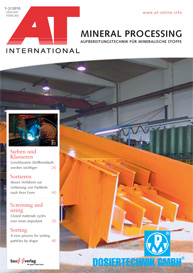