The inclusion of water recycling equipment on washing plant installations has risen dramatically in recent times as operators realise that in addition to the altruistic benefit of protecting the world’s most precious natural resource there are significant efficiency gains to be enjoyed. The specification of equipment such as thickeners and filter presses (Fig. 1) has seemingly progressed from being seen as something that was done only at the behest of planning authorities. “As recently as three or four years ago a thickener or filter press was only specified on around 20 % of our washing plant installations” explains Peter Craven of CDE Global. “The last 12 months has seen this figure rise to around 80 %.” The key drivers behind the increased specification of this equipment differ from one installation to the next and include issues concerning the space available on site to accommodate large settling ponds, the availability of the volumes of water required to operate a new washing plant, reducing health and safety risks on site and the efficiency improvements offered through significantly reduced operational costs.

In the UK market the specification of water recycling equipment has been most prevalent on construction and demolition waste recycling operations due to the nature of the sites where these plants are located. While it is usually the case that traditional sand and gravel or hard rock quarries are located in rural settings on large sites, the opposite is the case for recycling plants. “The nature of the material being processed means these sites are located in urban areas,” explains Peter Craven. Outside the recycling sector the demand for equipment is coming from operators who are introducing a washing plant for the first time according to CDE. “Operators considering a washing plant on a site that has previously only operated a dry crushing and screening process are more focused on the volume of water required to run the plant than those already operating washing plants” says Peter Craven. “One of the first things they are concerned with is reducing this space requirement. The specification of a thickener and filter press is the obvious way to achieve this.”

An equally pressing issue is gaining access to the volumes of fresh water required to run the washing plant should a thickener not be included. On a recently completed CDE project in Poland this was precisely the issue that the customer was faced with. “The customer had a requirement to increase sand production following the award of a new contract” says Peter Craven. “He chose the M2500 mobile washing plant to deliver this increased capacity but they simply did not have access to the volumes of water required to run the new plant.” The introduction of an AquaCycle thickener on this upgraded washing plant allowed the customer to recycle between 85 % and 90 % of the water used to feed the washing plant (Fig. 2). 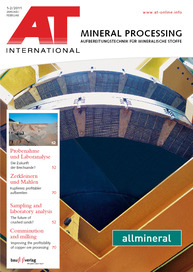 CDE has announced the establishment of an alliance with Sandvik Construction Brasil which will see the promotion of the CDE washing equipment portfolio through the existing Sandvik sales network in...

M?WS Equipment presented the latest addition to its product portfolio. The Hydropure thickener range is designed to maximise water recovery whilst minimising the use of tailing dams. The primary goal...

Tooperang Quarry has announced the completion of a silica sand washing plant at a new site near Adelaide/South Australia (Fig. 1). The plant has been supplied by CDE and is producing glass sands for...