At the end of January 2011, Hosokawa Alpine teamed up with Malvern Instruments to invite customers from research and development in Germany and Switzerland to a seminar on “Grinding, classifying and particle characterization in research and product development”. The seminar showed how already during product development provision can be made for scale-up to the planned manufacturing process and which processes correspond most closely to the later production processes.

Up until now, in mechanical process engineering, the only instruments available to the developer needed up to several hundred grammes of material for each test. Frequently, however, the available samples are much smaller. To solve this problem, new laboratory equipment was presented that permits grinding and classifying tests with just a few grammes of starting material. The process engineering of this new equipment is largely identical with large production machines with capacities in the range of several tonnes per hour.

Another aspect of the seminar covered the fact that with the trends towards ever smaller particles, the particle geometries and surfaces are becoming increasingly important in respect of the material properties. Appropriate analysis instruments as well as knowledge of the optimum use and correct evaluation of measurement results are the prerequisite for successful research. The seminar presented currently available technologies (Fig. 1) and explained aspects of their use for research and development.

The event concept is like a road show, which is set to tour six venues in Germany and one in Switzerland, so that customers do not have so far to travel. The programme comprises a lecture session, which is followed by demonstrations of the exhibits on tour (Fig. 2). The overall response to the invitations has been very positive. The first three events, which were held in February in Mannheim and in Olten/ Switzerland, and at the beginning of March at Hosokawa Alpine in Augsburg, were attended by a total of 179 people. For the forthcoming seminars in Dresden, Hamburg, Düsseldorf and Hanover, numerous guests have already registered. In addition, some of the European sales partners have already requested that the seminar be arranged for customers in their countries. Besides the European market, Hosokawa Alpine will concentrate internationally more on Russia, the Arab countries, India and South America and push ahead with the establishment of its own sites, e.g. in India, where the company has already been represented with a subsidiary for one year now. 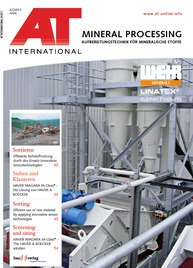 Hosokawa Alpine continues to strengthen base

Hosokawa Alpine is strengthening its base in Augsburg with investment in a newbuild production hall. On a footprint of 3600 m², new production shops and additional office space will be created. In...

At POWTECH 2010 Hosokawa Alpine presented a Turboplex 315/6 ATP-NG multi-wheel classifier (Fig.) with numerous design improvements. Over and above this, and dependent on the application, a total of...