Hosokawa Alpine is strengthening its base in Augsburg with investment in a newbuild production hall. On a footprint of 3600 m², new production shops and additional office space will be created. In addition, the construction projection also includes the conversion of an old warehouse to a highly modern test centre for cutting mills and recycling applications. The work began in March 2013 and will be completed following an intensive building phase of nine months. The newbuild project is part of the systematic continuation of investments in the Augsburg site. Back in 2007/2008 and 2009/2010 Hosokawa Alpine invested around € 20 million in the construction of new assembly and production shops. Another part of this extensive growth concept is the investment of € 4.1 mill. in capital equipment. Part of this was channelled into a new machining centre that went into operation in February 2013. Another part was invested in the equipment for the testing centre. Worth special mention is the installation of new series of machines to the test centre, modernization of the plant control, e.g. with regard to the process data capture, installation of state-of-the-art analysis instruments for particle characterization in the process engineering laboratory.

www.alpine.hosokawa.com
This article appeared in 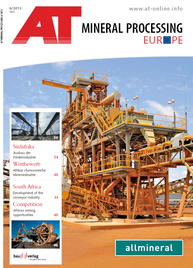 Hosokawa Alpine will be exhibiting at POWTECH 2013 alongside Hosokawa Bepex GmbH, Hosokawa Micron B.V. and Hosokawa Micron Ltd. Together they will present their range of machines, plants and turn-key...

?First and foremost, we encourage our customers to join forces with us when it comes to system development and preliminary planning. Its well worth it, even if the challenges appear to be great....

The mineral resources industry, driven by new applications and substitution competition in mineral products, has already undergone breathtaking development in the field of ultra-fine mineral powders....