AUMUND delivers two arched-plate apron feeders, each with a conveying capacity of 6000 t/h, to northern Mauretania (Fig.). They will be employed there by a leading mining company for bunker unloading of iron-sinter, crushed and ground iron-ore as well as iron-pellets. Delivery is planned for June 2011. With their arched-shaped plates, AUMUND arched-plate apron feeders form a surface which makes cleaning possible with a scraper. The task of regulating unloading capacity is performed by a speed-controlled drive. The lighter versions of these feeders can, by the way, also be equipped with a weighing rail and frequency-controlled drive and be employed as a weigh-feeder. Over the last decade the transport infrastructure in Mauritania, as well as the ore stockyards and shipunloading facilities, have been continually modernised in order to further expand the ore business. This is already one of the most important revenue sources for the West African country. 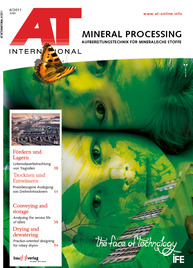 T?his summer AUMUND Fördertechnik GmbH will be supplying an AUMUND Arched Plate Conveyor to Mytilineos S.A. in Agios Nikolaos on the Gulf of Corinth in Greece. This is the location at which the...

Newly developed AUMUND Hybrid Feeder proves its worth at ERAMET

The recent commissioning at ERAMET Le Havres Sandouville Refinery in France brought another AUMUND project to a successful conclusion. The refinery is ERAMETs Nickel Salts and Metal business...

Dr. Michael Mutz (Fig.) has been new Head of Division, Minerals & Mining at AUMUND Fördertechnik GmbH in Rheinberg since April 2012. The 41 year-old born and bred Westphalian comes from a mining...

The first investment project outside Brazil for Vale, the Brazilian mining concern, is now being commissioned. The iron-ore pellet factory in the port of Sohar, Oman, produces up to 10 m. tonnes of...