There a modular plant concept was used, which was developed by BT-Wolfgang ­Binder and which had already been used successfully in Latvia and Byelorussia. The individual ­modules had been pre-assembled in Austria to minimize the erection and commissioning time at the site.

With the slogan “START–EXPAND–MOVE” the scope of plant will be expanded in the modular design system (Fig. 3) and adapted to the corresponding market situation. With a positive market development, a stationary plant will be installed instead of the modular one. Then the modular plant will be dismantled and can be erected at a new site. When changing from a modular to a stationary plant, the production downtime will be a maximum of 2 weeks. Due to this flexibility it is easier for the customers of BT-Wolfgang Binder to enter new count­ries and markets.

The fact that an order was placed with BT-Wolfgang Binder GmbH by a large German building materials group to erect a plant in modular design at the South Urals shows that this plant concept has proved to be a complete success in the market. This plant will be commissioned early in 2012.

Heinrich Fuchs, managing director of BT-Wolfgang Binder GmbH: “As general contractor in plant construction we provide support to our customers from planning up to commissioning and beyond. Customized plants, consistent further development as well as flexibility have priority for us in order to meet the requirements of the customers and to extend our markets.”

www.btw-binder.com
This article appeared in 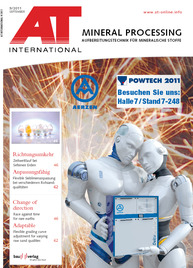 BT-Wolfgang Binder GmbH planned and realized the extension of the modular sand processing and mixing plant for Caparol in Belarus. At the beginning of the building season 2011, the building materials...

Today, MAPEI is one of the global leaders in the manufacture of adhesives, seals and chemical products for the building industry. In November 2013, the company awarded the contract for the...

WEG has appointed René Binder as the new Sales Manager of their subsidiary Watt Drive with headquarters in Markt Piesting, Austria. Effective 1 January 2017, Binder is responsible for managing...

The biggest Pilot Crushtec modular plant so far has been installed at a limestone crushing site in Ndola near Lusaka/Zambia (Fig.). Owned by local company Zamm Imports Ltd, the plant includes 18 Pilot...