1 Market situation of the limestone industry in ­Germany

Following the years of the financial crisis in 2008 and 2009, which resulted in a considerable decline in the construction sector, building activity has revived since 2010. In the year 2010, the number of building permits increased by 2.8 % overall on the previous year (source: Federal Statistical ­Office). Since 2009, the mood in the building materials industry has improved substantially according to the ifo-­business climate index (source: ifo-Institut). 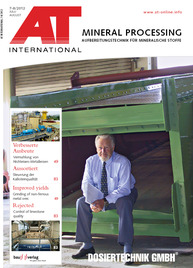 On 23.07.2010 the Karl Kraft Steinwerke oHG in Heidenheim an der Brenz/Germany, placed an order for a LOESCHE LM 19.20 D mill (Fig.) for grinding limestone. The mill will be installed in a recently...

Start of production with Loesche Mill

LOESCHE can gain a major order in the Indian energy market

In one fell swoop, LOESCHE has sold 32 coal mills to India and gained a new end customer in the process. The large vertical roller mills (VRM), with two rollers each and a performance of 79.2 t/h or...

T???????he cement producer SemeyCement has placed an order with Gebr. Pfeiffer for a vertical mill of type MVR 5000 C-4 to grind various types of cement. This state-of-the-art mill will be installed...