BT-Wolfgang Binder GmbH planned and realized the extension of the modular sand processing and mixing plant for Caparol in Belarus. At the beginning of the building season 2011, the building materials production plant of the Caparol factory in Belarus went into operation. The modular plant system of BT-Wolfgang Binder was used (Fig.). At that time, the decision was taken in favour of a modular plant for two reasons. First, the plant had to be built in a very short time and be capable of later extension. Second, depending on the market development, the possibility was to be given to replace the plant with a conventional tower type plant.

Within a very short realization time, a small, simple and low-cost production unit for building materials including sand processing was to be installed at the site in Belarus with the option of extending this modular plant in line with future needs. So the modules prefabricated at the BT-Wolfgang Binder factory were connected mechanically, electrically and pneumatically and commissioned at the site in Belarus within a period shorter than 30 working days.

The option of replacing this production unit depending on market development with a conventional tower-type sand processing and mixing plant with a commensurately high annual capacity is also given. The modular plant will then be dismantled and set up at another site – true to the motto of BT-Wolfgang Binder “START-EXPAND-MOVE”.

As the site in Belarus has developed very positively since the start of production, in 2012 the first step was taken to extend the plant. Additional raw material silos were installed and the materials screening unit extended. This extension was realized with plant modules prefabricated at the factory of BT-Wolfgang Binder and fitted with electric cables and pneumatic pipes prior to delivery. Following the mechanical assembly only the electric and pneumatic connections to the main plant had to be made. The adapted version of the plant control was imported via the remote maintenance system and production could be resumed after only a short interruption.

The next planned plant extension will involve further auto­mation in additive storage and dosing. In line with future market development, the modular plant will be replaced with a stationary tower plant. The modular plant will then be dismantled and moved to a new site.

www.btw-binder.com
This article appeared in 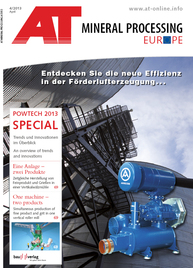 Russia places its trust in know-how from Austria

The company BT-Wolfgang Binder has set up for baumit a sand processing and mixing plant for building materials in Russia (Fig. 1) and has successfully entered the market as general contractor. The...

The biggest Pilot Crushtec modular plant so far has been installed at a limestone crushing site in Ndola near Lusaka/Zambia (Fig.). Owned by local company Zamm Imports Ltd, the plant includes 18 Pilot...

Today, MAPEI is one of the global leaders in the manufacture of adhesives, seals and chemical products for the building industry. In November 2013, the company awarded the contract for the...

FLSmidth has received an order from Slavkaliy to supply equipment to a new potassium mining and processing facility in Belarus. The contract is valued at around  48.2 million and will be booked in...