B‌lending beds are coming into increasing use in the cement, iron and steel and other industries. A blending bed, in general, has three functions:

Storage serves for stocking of sufficient feed material to assure maintenance of continuous operation during normal circumstances and, simultaneously, for absorbing fluctuations in production.

Blending of components is intended to ensure that a certain number of feed materials of diverse chemical and/or physical properties are mixed together in amounts such that a desired composition is then present in the finished blending bed.

Homogenisation is intended to balance out fluctuations in the properties of the material(s) stored.

To achieve these objectives, blending-bed facilities are created in a number of configurations, such as circular and longitudinal blending beds, for example, either enclosed or outdoors, while one of a number of possible stacking patterns can be selected.

On a circular blending bed, the material is stored via a stacker which pivots around a central column. A reclaimer also rotating around the central axis of the stockpile conveys the material into a central low-level hopper located beneath the central column. Further conveyance takes place below the circular bed via tunnel conveyors [1]. Thanks to their compact design, circular beds are suitable for covered storage of bulk materials. Unlike longitudinal beds, continuous storage and reclaiming simultaneously is possible without restriction from one and the same stack.

Probably the most widely used form of storage for bulk materials are longitudinal stacks (Fig. 1). These frequently take the form of open-air storage facilities. They can, however, also be housed in a closed building if the material stored must not be exposed to the effects of the weather or if the environment must be protected against emissions.

Stackers moving along the stack, or belt conveyors with belt-conveyor tripper cars located on the stack ridge, are used for stacking the bulk materials (Fig. 2). Bridge-type (Fig. 3), bucket-wheel and drum reclaimers are used as the equipment for reclaiming. Longitudinal stacks are frequently created in pairs, this having the advantage that one stack can be built up and the other used for reclaiming at the same time. A comparison of the basic designs makes it possible to state that longitudinal blending beds require less investment costs but need more space than circular designs.

Of the various stacking methods, that using chevrons is the most commonly used (see lead picture). The bulk material is stacked in layers of a “gable-end” section on one another. Provided the individual layers are stacked uniformly across the entire length of the stack and reclaiming takes place from the front end, a high level of homogenisation can be achieved. The bulk material should be added in the thinnest possible layers, the largest particle-size of the material limiting the minimum layer thickness achievable. The usual number of layers varies between around 300 and around 600. Higher numbers of layers result in scarcely any further improvement in homogenisation [2].

The volume of the blending-bed stack (Fig. 4) results in:

The dimensioning of the blending-bed stack is performed using the requirements for the project:

1. If a reclaiming unit, e.g. a bridge-type reclaimer, is included in the design, the width of the stack is thus stated and the length calculated.

2. If the plot plan is subject to restrictions, the length of the blending bed is a given and the width is calculated.

3. The length-to-width ratio may also be a factor of importance in conjunction with homogenisation, since a mass ratio of < 25 % should be assumed, in order to minimise the negative effect of the end cone on homogenisation.

In determining the stack dimensions for a given storage capacity, one variable, either stack width B or stack length L or length-to-width ratio, must therefore be stated in order to be able to calculate by means of a formula (3) the respective other variables.

can be converted using the substitution

to the reduced form

and solved using the trigonometrical formula:

the correct solution is found:

The mass ratio (Fig. 5) of the end cone to the parallel stack is

The homogenisation and also mixing effect, E, is defined as the quotient of standard deviation of input to output:

During the planning phase for a blending-bed facility, dimensioning proceeds in accordance with the rules described above. Models are used for determination of homogenisation, the number of layers deposited N being the variable sought. The simple models for homogenisation of fluctuations in properties are not taken into account by the auto-correlation function. It is assumed that the characteristic values of samples of the same scope, taken at certain intervals from a mass flow, remain non-correlated and normally distributed:

This relationship also follows, as a boundary case, for extremely long homogenisation stacks and negligible correlation and states, at best, the dependence of number of layers on mixing effect [1,2]. The more demanding models for homogenisation take into account the correlation of initial fluctuations, an auto-correlation function in the form of an exponential function being assumed in most cases. The Gerstel model [3,4] exhibits good results, for example, but can scarcely be used for practical design of blending beds, due to its complicated calculation, such as determination of the parameters of the auto-correlation function, among others.

The following correlation between number of layers and mixing effect was determined on the basis of experimental investigations on a blending bed of reduced dimensions with appropriate miniaturisation of the particle-size of the bulk material [5]:

After entry of the standard deviation of the mass input flow, the mixing effect, or the standard deviation of the mass output flow can be entered in the design program; the missing variable is then calculated and the number of layers determined using the above equation. The equation is confirmed by the experimental tests in the 200 to 600 layer range (equivalent to E = 5 to 7.5). The number of layers can be modified as necessary for further calculation.

It is assumed for calculation of the stacking rate ME and reclaiming rate MA that one stack is created and another stack depleted.

The stacking unit yE has a travel speed of

The reclaiming unit yA has a travel speed of

The throughputs (“rates”) stated refer to a cycle of one week building up and one week reclaiming of the stack. The throughputs can be corrected if a different cycle is planned.

Following his studies in process engineering, Dr Rüdiger Schramm earned his doctorate at Freiberg University of Mining and Technology, having researched the relationship between transport and comminution behaviour in ball mills. In a cement plant engineering company in Dessau and the later KHD factory in Dessau, he was responsible for the process engineering of the thermal and mechanical processes, The diverse range of experience that he amassed there between 1963 and 2000 is now utilized on freelance basis in the successor company Zadcon GmbH Dessau. 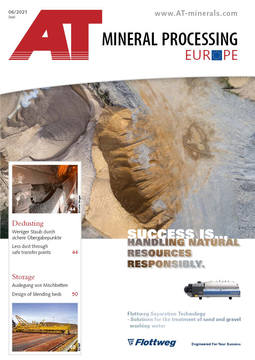 For almost 80 years, BEUMER has been developing tailor-made system solutions in conveying technology for the stone and quarry industry, power plant industry, mining (ores and coal) as well as the...

In many industrial processes  as for example in the cement industry  the regularity of the raw materials used plays an important role in the manufacture of products. This uniform consistency is...

More than 50 circular storage facilities to China and Taiwan

HUA YANG (LUOYANG) ELECTRIC Co. Ltd. ordered a further circular storage facility from SCHADE Lagertechnik GmbH in Herne/Germany. The circular storage will be erected in Xiamen by the end of 2012,...

BEUMER Group provides engineering of stockpiles for the coal industry

H?ard coal is temporarily stored in stockpiles and then continuously fed to be processed, as needed. The design of the depositories must ensure constant filling and reliable emptying. The required...