Leading quarrying companies are placing increasing emphasis on the highest possible standards for safe, efficient and productive operations. When these three aims were combined as the primary criteria for their latest aggregate quarry plant, Lafarge Aggregates Malaysia sought a partner who could deliver the highest quality, whilst meeting what are traditionally seen as incompatible goals. Lafarge Aggregates Malaysia chose Sandvik Mining and Construction Malaysia as their partner of choice in this project, as ­Sandvik possess unique turn-key project expertise, which is also matched with local experience. Thus, Sandvik Mining and Construction Malaysia have recently designed and installed the 250 t/h four-stage crushing and screening plant located in Kulai, Johor/Malaysia (Fig. 1), approximately 270 km south of Kuala Lumpur, which has been fully operational since March 2012.

Malaysia is proving to be a strategically important market for Lafarge Aggregates, and the new plant will play a key role in providing high quality aggregates for the expanding Malaysian construction industry. The driving force behind the plant design came from Lafarge Aggregates Malaysia’s emphasis in ensuring that the Kulai plant would be able to satisfy the market demand for aggregates, but also that operational safety was endemic from the very start. This commitment has brought uniqueness to the plant, this is shown by the extension of the concrete surge tunnel; thereby facilitating openings from both sides and allowing for easier escape on either side should an emergency occur. Furthermore, walkways are wider than normal which ensures safer mobility, as well as enabling easier access for maintenance. The finished plant has numerous other safety features that have been incorporated from the initial design concept, with many ideas resulting from the innovative thinking of ­Lafarge Aggregates Malaysia, and specifically the Kulai Quarry project team (Fig. 2), with additional invaluable input from the Lafarge Health and Safety Department.

The fully constructed plant now includes of some of the most advanced breaking, crushing, screening and feeding equipment currently available on the market. At the very heart of the operation is a Sandvik CJ412 primary jaw crusher, a CS430 secondary cone crusher, a CH440 tertiary cone crusher and a CV228 quaternary vertical shaft impactor. This equipment, when combined with the state-of-the-art plant design, has the capability to efficiently produce five different products at the required production rate of 250 t/h. The five products produced are as follows:

One of the reasons for the plant‘s impressive capacity is due to the principle cone crusher used being the Sandvik CH440. With hydraulically adjusted CSS, optional automation, a choice of several different crushing chambers, and many other high performance features, the CH440 is versatile, user friendly and highly productive. Another piece of crushing equipment that has been instrumental in the success of the Lafarge Kulai aggregate plant is the CV228 VSI, which is characterized by reduced power consumption, increased capacities, reduced maintenance costs, and thus requires fewer maintenance services.

The CV228 has been primarily designed to operate as a third or fourth stage crusher, proving it to be ideal for ­Lafarge’s manufactured sand application. Sandvik’s patented auto­genous “rock on rock” crushing technique results in several major advantages in the production of manufactured sand, with perhaps the most important for Lafarge being the consistently cubical product shape, which results from the extremely low flake and elongation values. Due to the design of the VSI, the product gradation remains constant even as rotor expendable parts wear, thus ensuring that contamination rates are extremely low as no wear parts are used to directly crush the rock.

An additional, but no less important benefit is the low environmental impact of the Sandvik VSI. As a whole, the CV228, and the CV200 series utilize Sandvik’s patented Bi-Flow® system and high performance rotors. These are used in conjunction with the second generation wear parts that have resulted in dramatic power reductions, yet are capable of producing higher tonnage throughputs despite this reduction in power. The result of this development is that up to 20 % of the maximum crusher throughput can be effectively handled through the Bi-Flow system, thus producing a significant saving in electricity costs and lowering of Lafarge’s CO2‑emissions per ton.

Although the crushing plant is at the heart of Lafarge’s aggregate plant, further Sandvik equipment has been used thereby maximizing productivity, safety and efficiency. This additional equipment includes an SGF1260 grizzly feeder, two E8203 vibrating screens, and a BR927 hydraulic breaker. There is also an additional Sandvik BR927 hydraulic breaker at the primary production stage of the plant incorporated as an additional safety feature, and a BB285 boom system mounted on the primary opening. Alltogether this new plant with its intelligent design, and state-of-the-art equipment (Fig. 3), proves that modern aggregate plants can maximize safety, production flexibility and efficiency at the same time. 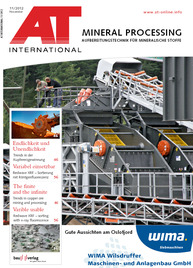 Q?uarries and mines need a crushing solution that is not only tough, durable and reliable, it should be easy to get up and running to provide optimum performance. Sandvik Jaw crushers are now...

CDE has announced the establishment of an alliance with Sandvik Construction Brasil which will see the promotion of the CDE washing equipment portfolio through the existing Sandvik sales network in...