Have you heard about the Stöffel Park? If not, then it‘s time you did! The once largest basalt quarrying district (140 hectares) in Germany‘s wooded Westerwald hills, a fossil bed of global importance, and the over 100-year-old preparation and works facilities, make a visit to the Stöffel Park more than worthwhile.

The Stöffel Park is located in the midst of the forested hills of Germany’s Westerwald region, between the villages of Enspel, Nistertal and Stockum-Püschen, and thus a little to the south of Bad Marienberg. Its name can be traced back to the Stöffel, a basalt dome that evolved in the course of some hundred years into the Westerwald’s largest contiguous basalt quarrying district. The “Stöffel Tertiary and Industrial Encounter Park” documents not only the history of basalt quarrying, extraction and preparation, but also makes visible what occurred 25 million years ago around the then existing “Stöffel-See” lake. A historical view is not the only concern here, however - the focus is also on new uses for the old works facilities and, indeed, the former quarrying areas - all of which, with all its diversity, has been encapsulated in the name “Stöffel Encounter Park”.

A century of basalt quarrying

Until the late 19th century there was scarcely any industrial activity in the Stöffel region, which experienced a kind of economic upturn only in 1902, when the J.G. Adrian company started initial preparatory work for basalt quarrying at Stöffel. Actual quarrying began, using the very simplest means, in 1903, with the construction of a rail loading platform and a crusher building. From then on the trend was uninterruptedly upward. The original forge, which today houses the “Historic Workshop” encounter area, was built in 1904. There were an initial six persons employed in the quarry by 1906. The first crusher installation was commissioned. Business was good, and twenty Italians were taken on as early as 1907, to counteract the lack of local labour. The weekly wage in those days varied between 35 and 40 marks. In around 1914 the “Lokomobile” - a traction engine - initially used for the generation of energy was replaced by a stationary steam engine, the smokestack for which, at 38 meters height, became a new identifying symbol for the Stöffel. Some things became easier around this time: basalt quarrying was made less strenuous by employing blasting technology. The construction of an explosives store was therefore a necessity by as early as 1912. The quarry’s steam engine was superseded by three powerful electric motors, manufactured by BBC and each of 125 hp rating, in 1922, and three new crusher machines were added. This also marked the achievement of a transitory record: a total of 330 000 tonnes of basalt were extracted from the faces at Stöffel, Hergenroth and Limburg in 1927. Up to 1000 persons were employed at the quarry during the 1920s. The year 1949 witnessed the construction of spares stores, so-called “Nissen huts”, and of living quarters. The focus from 1950 onward was on mechanisation of the existing industrial facilities; haulage was also converted to road-trucks at around this time. In addition, ever more excavators were now deployed, as advances in blasting technology made it possible to extract more and more rock. Manual work thus began to decline. Adrian employed 120 persons at this time. A conveyor belt feeding directly from the crusher machines to the rail loading platform was installed in 1958, signalling the gradual end of the use of skips. Quarrying continued up to the end of the year 2000, with the ultimate workforce numbering just eleven persons. Production by Adrian alone amounted in the final year of operation to nearly 341 000 tonnes. The deposits are now effectively exhausted, and the former basalt dome is today a depression in the landscape. Unlike events at most other minerals-producing sites, however, the old quarrying equipment and buildings here were not demolished, but were instead repeatedly modernised or repurposed by the company owners in the course of the years. This, then, is the reason that the old basalt works facilities today remain virtually complete. Of particular interest in this respect are the Historic Workshop, the boiler and switchgear house, the coalhouse and the hewer huts, and, of course, the crusher machines.

The Historic Workshop, including the old forge and the former wainwright’s shop, can be described without exaggeration as the centrepiece of the old facilities and is, following sensitive and historically authentic renovation, without doubt an important attraction for the site as a whole. These buildings are now a venue for a large range of cultural events. The Historic Workshop was originally the “technology center”, perhaps the most important element in the entire basalt works. The workshop is where all the work necessary for trouble-free operation was performed, including all kinds of repairs, conversion work and, of course, the on-site production of tools and machine components. Screens, chutes, conveyor belts and crusher cones for basalt quarrying, comminution and sorting were also made and/or repaired here. The wainwright, along with the smith and the fitter, was also indispensable: it was he who produced the skips so vital for the basalt industry of the time. At the Stöffel the workers used the skips to transport the crushed basalt and the finished cobblestones. The skips’ underframes were initially riveted, later welded. Their axles were also made in this workshop, only the wheels and bearings being supplied as finished products. The profession of wainwright died out as soon as technological progress made skips and carts superfluous. The former boiler and switchgear house, the steam engine of which used to supply energy for the entire works, is now home to the “encounter toilets”: the original transformer station can be used while visiting the toilet to reproduce the signals and other sounds of the former facilities, almost as if on a musical scale. The erstwhile coalhouse now serves as a café, providing an extremely welcome break for refreshments, before our tour continues into the partially five-storey crusher building. Also extremely interesting: the old hewer huts, where the cobblestone hewers, the so-called tippers, hewed cobblestones the year round in all weathers. The old inclined ropeway also rewards closer inspection: here the empty skips were pulled uphill by the weight of the descending, laden skips. It is possible to visit these facilities unaccompanied, but it is more recommendable to take an organised tour, since the guide will explain many fascinating details.

The Stöffel Park is part of the “Westerwald-Lahn-Taunus Geopark”, which permits insights into the history of the Earth at several location in the Westerwald on the basis of the quarrying of minerals resources in the form of lime, basalt, clay and various iron ore types. This, in the case of the Stöffel Park, is the ancient Stöffel-See lake, which was overlaid by thick strata of basalt more than 25 million years ago in the course of a series of violent volcanic eruptions. This is also the origin of the appellation “Tertiary Park”, since the fossil beds of the Upper Oligocene once again became accessible as a result of the quarrying of basalt at this location. Excavations have been under way here for more than twenty-five years - around 20 000 fossils of greatly differing types have been found and conserved. And in 1992 the archaeological team found a mammal that made the Stöffel famous around the world. Scientific analysis of the skeleton of this small mouse-like animal, along with its hair and the contents of its stomach and intestines, indicated that this was the first find of a skeleton of a small mammal of the now extinct eomyidae family of rodents. It proved to be an example of the genus Eomys quercyi, already known up to then only from finds of individual teeth and bones. The unusually good and complete state of preservation of a patagium (gliding membrane) permitted precise reconstruction of the locomotion and living habits of the “Stöffel Mouse” as a gliding mammal, similar to present-day flying squirrels. It remains even today the earliest evidence of gliding flight in rodents. It is conjectured that the Stöffel Mouse was carried by gusting winds out onto the lake, where it drowned. It is, of course, predominantly animals which actually lived in the lake which are preserved. The fossilised remains of terrestrial animals, such as moles, cormorants and wildfowl, and even a hare, are therefore among the rarer finds.

Encounter park: Rediscovering the old – but receptive to the new

Rediscovering the old anew is not the only aim of the Stöffel Park, however - quite the contrary: the keyword “encounter” stands for a whole programme. Whether a walking tour of the quarry focusing on various central themes, the Quarry Encounter Garden, the observation tower or the regional “Kräuterwind Genussreich Westerwald” (roughly, “Scented Wind - Enjoy the Westerwald!”) project, visitors can choose on-site from a large range of attractions, including exhibitions, music events and local culinary specialities. Almost inevitably, this rich background has also given rise to productions that attract acclaim beyond regional boundaries, and which deliberately include the historical framework. We may mention here by way of example only the Westerwald Tuning Meet, a number of tractor and vintage-car meets, 24-hour mountain-bike races and musical events covering a large selection of genres - the Stöffel Park consciously exploits its ambience of old buildings and abandoned minerals quarrying, which is probably unique in the form found here. So it’s “All Action!”, and precisely that is the greatest incentive to visit the Stöffel Park. 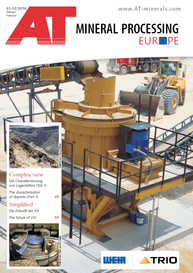 Dear Readers The topics of the first issue of the year 2016 are a bit different than those you are used to. We could also call it to take a look behind the scenes. The first material week...

Operating an old quarry cost efficiently sometimes means venturing down new roads in the production process. At the quarry operated by Terratec-Basalt GmbH, the plan is to lower operating costs. For...

CMS Cepcor has announced plans to expand their manufacturing and distribution facilities at their Coalville headquarters in the UK. A new built head office (Fig.), crusher training centre, product...

When it comes to obtaining the optimum result in hard basalt crushing right away and ensuring the highest possible level of work safety, a combination of jaw crusher and hydraulic hammer is the best...