W‌‌‌hen in 1948 the founder of the company of the same name, Josef Bohnen GmbH & Co. KG in Swisttal (Voreifel), the decision was consciously made in favour of gravel extraction or against an agricultural business: Since gravel deposits were already half a metre below the topsoil in the district of Straßfeld, Bohnen gave preference to the commercial extraction of sand and gravel at that time due to the favourable soil conditions.

Today, his daughter and her husband, Ines and Matthias Haus, run the company in the second generation with a total of about 20 employees and an extensive fleet of equipment and vehicles. In addition to the original core business of gravel extraction, other competences such as civil engineering and demolition work, construction waste processing and the operation of a construction waste landfill have been added over time.

The storm disaster in July 2021 hit Swisttal and the Bohnen company equally hard: the soils saturated by the persistent heavy rain could no longer absorb any more water, which meant that increased masses of water from the fields flowed in on places like Straßfeld, which is located in a depression. Smaller rivers such as the Swist or the Gräbbach overflowed their banks, and the water pressure on the cellars particularly affected the older houses – backwater protection was not available in many cases.

A not inconsiderable part of the water masses, which would otherwise have additionally burdened the village, was absorbed by the nearby mine of the Bohnen company: as a result of the events, the company’s own gravel works with a stationary crushing plant was completely submerged up to a height of 1.50 m over an area of 55 000 m². For six days, attempts were made in vain to control the accumulated precipitation with their own means, but the performance of the existing pumps proved to be insufficient. For the successful drainage of the area, the help of the Technical Relief Organisation was needed for more than four days, whose staff had travelled from Paderborn, Detmold and Solingen to deal with the water masses with powerful pumps in shifts.

Regardless of being directly affected themselves, the Bohnen company used the means at its disposal to provide immediate help, especially around nearby Euskirchen: heavy wheel loaders were used to load sand for the municipal building yard, and night operations were carried out in accessible places such as Schweinheim, Flamersheim and Weilerswist with sandbags and appropriate lighting. Two weeks after the flood events, regular operations at Bohnen could only then be resumed. The full extent of the heavy rain disaster was not known until many weeks later: In the three months that followed, about 50 000 t of building rubble from households destroyed by the flood were delivered to Bohnen – in addition to the quantities that accumulate in normal daily business anyway.

Managing Director Matthias Haus is aware that this is only the proverbial tip of the iceberg: “In addition to the disposal of the building rubble that has already accumulated – mostly paving stones, paving slabs and damp masonry – there will be demolition work, which is not expected to start until the end of the year and will affect an estimated 800 houses in the Ahr valley alone. So far, emergency demolitions have only been carried out on houses that were in acute danger of collapse due to structural considerations.”

Since the existing crushing plant could not cope with the additional load caused by the flood disaster alone, Matthias Haus contacted Ralph Phlippen from Fischer-Jung in Krefeld in search of a solution. The company specialises in the distribution of crushing and screening plants and has been serving the Bohnen company for a very long time. “We have already been working successfully for many years with a mobile impact crushing plant from Metso Outotec, a Lokotrack LT1213S, and particularly appreciate the processing quality, robustness and the resulting low downtimes,” explains Matthias Haus.

During the conversation, the need for quick help for the affected localities and their flood victims crystallised, whereupon Ralph Phlippen contacted the Finnish manufacturer Metso Outotec together to clarify the details. “We immediately considered the Metso Lokotrack Urban LT106 as a suitable machine for this specific purpose,” explains Hugo van Benthem, Metso Outotec Germany. “The compact and track-mounted jaw crusher is particularly low-emission due to the rubber lining of the feeder floor, enclosed discharge belts and high-pressure water spraying, which not only facilitates its use in urban environments in general, but also got the approval process underway as quickly as possible in this urgent case.”

Following this decision, the resources of Metso and Fischer-Jung were now pooled to locate an available machine for immediate use in Strassfeld at short notice. Much to the relief of all involved, not only was the new Lokotrack Urban LT106 finally released at short notice; Metso Outotec also decided to make the jaw crusher available free of charge for four months as part of the flood victim aid. “We were very pleased to receive the request from our partner Fischer-Jung, who gave us the opportunity to actively help with the flood recovery,” explains Adrian Wood, Vice President Capital Business and Support AGG DMO, Metso Outotec. “If you are concerned about sustainability and environmental conservation, this also means being directly involved in eliminating the consequences of natural disasters.”

“When we heard about the generous gesture of rent-free provision of the Lokotrack Urban LT106 from Metso, we immediately took action, organised transport and installation, and then instruction and commissioning. As a supplement to the jaw crusher, we rented a Metso Lokotrack ST2.3 mobile screening machine to the Bohnen company at exceptional special conditions. All in all, it was simply great to experience how everyone worked hand in hand to make this short-term, urgently needed flood relief possible,” says Ralph Phlippen of Fischer-Jung. 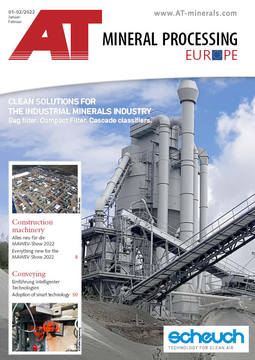 A?s a response to the fast growing demand for more sustainable crushing and screening equipment, Metso Outotec is introducing the Lokotrack e-Power range, which brings the diesel-electric Lokotrack...

Metso Outotec is complementing its line of mobile and modular stationary crushing solutions with a sizer option specially designed for soft ore and aggregate applications. The new additions to Metso...

Pekka Vauramo to continue as President and CEO of Metso Outotec

Pekka Vauramo will continue as the President and CEO of Metso Outotec until the end of 2023. This is a unique opportunity to lead the integration of the two great companies into Metso Outotec and to...

Metso Outotec has signed an agreement with Florence Copper Inc., a subsidiary of Taseko Mines Limited, to supply copper solvent extraction and electrowinning technology for a plant to be built in...