MGV stands for Erdarbeiten (earthwork), Maschinen ­(machinery) and Gerätevermietung (equipment hire). The company was founded in April 1990, employing five to six people. Although in those days, the company did not have its own recycling yard. Over the following 26 years, waste disposal costs have steadily increased. Revenues, on the other hand, have fallen steadily as a result. Quite simply, the company lost some of its competitiveness. To remedy this situation, the owner of the company, Bernd Scherfisee, applied for a licence to operate a recycling yard. Three whole years were needed to find a suitable site and present the necessary licences and clearance certificates, before in August 2010, the company could open its own recycling yard.

In the meantime, as a firmly established company, EMGV employs around 25 – 30 people. In the course of the years, various investments have been made in machine engineering. For soil remediation, for example, first a used wheel-mounted trommel screen was operated, while for coarser feed material a wheel-mounted double-deck screen was used. Constantly increasing market demands and stricter environmental regulations, however, soon led to some construction materials no longer being processed acceptably with the available screening equipment. Especially handling of extremely cohesive soils, construction waste and asphalt became increasingly problematic for Bernd Scherfisee.

On the back of the company’s many years of contact with Christophel in Lübeck, in 2016 it started looking for a low-cost, economic solution to these problems. To handle the construction materials to be processed and the expected annual volumes, the track-mounted “Warrior 800” scalping screen from Powerscreen was chosen. This machine on chains weighs just under 17 t with a transport length shorter than 10 m. It can be used as a scalper as well as to rescreen materials. The aggressive double-deck screen box has a divided screening surface on the upper and lower deck, and therefore enables highly flexible selection of the screening surface. With minimized set-up times, the operator can respond quickly to a wide range of feed materials. The screen box has been made with the so-called huck-bolt cold riveting process and enables higher strokes and acceleration forces than usual. The sized screen material is discharged on three discharge belts with a throw-off height up to 3.64 m. This saves the permanent moving of materials between stockpiles.

Bernd Scherfisee was initially sceptical whether a single Warrior 800 would be able to replace the two existing screens. A quickly organized demonstration with a screen fresh from the factory finally gave a clear answer. The short set-up time and the fast, uncomplicated screen changeover were clinching arguments. The screen was rigorously tested over an entire day. All the tasks set were completed to full satisfaction Even the toughest challenge, screening very cohesive soils left the potential buyer in no doubt. The machine does exactly what had been promised in the previous talks. And even several months after the delivery of the new Warrior 800, Scherfisee sees this investment as a stroke of luck in the replacement of the two previously used machines. 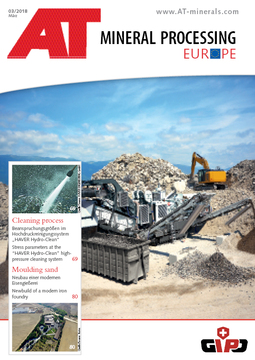 Powerscreen to exhibit at CONEXPO-CON/AGG

From 22.-26.03.2011 will be held the CONEXPO-CON/AGG in the Gold Lot outdoors at the Las Vegas Convention Centre. Powerscreen will be on the Terex stand at booth 140 and will exhibit different plants...

Expertise as a one-stop service provider

Thanks to its flexibility and expertise as a one-stop service provider, especially in drilling, blasting and processing, Recycling GmbH Lahnau landed a major order near Wuppertal at the end of 2012....