To mark its 100th birthday, Steinhaus GmbH from Mülheim an der Ruhr is presenting a world first with its patent-pending “Steinhaus MLock” system screen. Steinhaus GmbH is thus taking up old traditions. After all, the company is regarded as the inventor of polyurethane screens, ever since the first industrially manufactured screen made of polyurethane was introduced in 1968. This was followed as early as 1976 by the “Kombiplast” system; the world’s first system screen and thus the forerunner of all system screens in existence today. The next milestone: The UNI 2000 system screen has been setting the standards in terms of open screen area for 25 years.

Following in its footsteps, “Steinhaus MLock” is now the world’s first magnet-based and self-centering system screen bottom. Even if the system screens currently on the market are proven and established, they all share more or less the same weaknesses. Like the mounting bars permanently mounted on the screening machine, the screens themselves – or the corresponding mounting material – have to be driven in with great effort. This, of course, involves a risk of accident that should not be underestimated.

Why risk of accident? Often, the space above the screen bottom is also restricted, making it almost impossible to install the screens. Shower lines could perhaps still be temporarily dismantled for hammering in the screens. But, and the costumers have certainly already made this experience, in many cases the installation space is permanently restricted, for example under a feed box, a shaft protection tube, a drive bridge or even a dust hood.

At this point, an important note: The European standard EN 1009-4 for screening machines has already created new specifications with regard to ergonomics and occupational safety. As a rule, it must now be observed in the design of new screening machines that a clearance of 550 mm must be maintained above a screening floor if this space has to be walked on. This requirement applies to the clearance between the screen decks of a multi-deck screening machine in particular.

What is, of course, desirable for ergonomics and work safety, poses a great challenge to the manufacturers of screening machines, the plant engineers and also the operators. Where “classic” system screens are used, for example, circular vibrating screens with at least three screen decks will generally have to become much higher in the future. The three-deck circular vibrating screens frequently used in gravel plants, which are as compact as possible, can hardly, if at all, be built reliably in the future. The drive will be pushed so far out of the center of gravity of the screening machine by the design adjustments that such a screening machine will no longer be able to perform proper circular vibration. Attention. The consequence of EN 1009-4 is that modernization of existing plants is only possible to a very limited extent. The greater overall height also results in a higher weight, which not only leads to higher investment costs, but also to higher maintenance and servicing costs and a greater energy requirement. These effects act as a multiplier for economic efficiency on the entire plant design.

Solution: The problems mentioned are circumvented by “Steinhaus MLock” in an elegant way

The Steinhaus MLock adapter strip is installed once, in which strong magnets and positioning cams are incorporated. This adapter bar will be available for the most commonly used screening machine supports (hollow section and perforated angle longitudinal member). If angular longitudinal beams are installed in the screening machine, the adapter bars can even be easily mounted from below, without a hammering tool.

The screen elements themselves have a magnetizable counter pole and recesses for the positioning cams. When the screen components are inserted, each individual component finds the correct position by itself and is connected to the screen machine vibration-proof by the magnetic force. The screens can therefore be installed without tools and are therefore easy to install even in places that are difficult to access. For disassembly, the screen bottom only has to be slightly levered out on the front side. Since the holding forces are immediately reduced by releasing the outer magnets, the screen bottom can be removed just as quickly and safely as it is installed.

Multi-deck screening machines do not have to be built higher – as is the case when using classic system screens – due to the specification of EN 1009-4. “Steinhaus MLock” can simply be installed from below, i.e. from underneath a screen deck. Since the screen deck does not have to be walked on in this case, the clearances specified in the standard do not have to be observed. Installation can therefore be carried out quite simply from the hopper, for example. Even more clever is a screening machine design in which, starting from a screening deck with a larger clearance, a narrower screening deck arranged above it can be changed. Thus, contrary to all fears, screening machines can even be built slimmer than ever before. Your advantage: savings on the cost side and on resources. 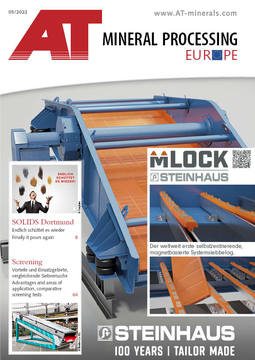 The new Terex® Finlay 873 (Fig.) is designed to work after a primary crusher or on its own as frontline screening machine. This machine is suitable for working in quarrying, mining, construction and...

A?t POWTECH 2019 STEINHAUS will be presenting innovations and proven solutions in the field of separation, here mainly the solid-liquid separation. The products of the OPTIMA welding gap series, which...

Which screen for which application?