The Borth rock salt mine and salt works are located in Rheinberg, about 60 km from Düsseldorf. Between 7000 and 8000 tons of salt are mined and processed there every day. The plant is operated by K+S, Europe’s largest salt producer. The salt extracted from the mine is first stored temporarily before being used, among other things, as road salt. Borth has a storage capacity of more than 250 000 tons of salt: 180 000 tons in underground bunkers and around 70 000 tons in a storage hall. It is precisely here, in the storage hall, that a drive solution from RUD ensures trouble-free hall charging with salt.

A movable belt stacker was optimized, which now runs without failures and with low maintenance thanks to the robust RUD Tecdos round link steel chain and the innovative drive system RUD Tecdos Omega Drive. The chain and drive were integrated into the existing steel structure. The specialists of the RUD Group, RUD System GmbH, Herfurth & Engelke Förderanlagen GmbH and RUD Ketten Rieger & Dietz GmbH and Co. KG, worked closely together on the conversion solution.

RUD Tecdos: the optimal solution for trouble-free drive in the salt storage system

“The round link chain in combination with the Tecdos drive is the optimal solution for us,” Alexander Gils concludes. He has been working for K+S at the Borth site since 2013 and, as an operating engineer in the surface area, is responsible for maintenance and conversion work on the conveyor systems. “Previously, our mobile belt stacker ran by direct drive of the wheels via a gear motor and roller chain. But with the salt and humidity in the unheated warehouse, the wheels kept slipping or blocking on the tracks. At least once a week, the system failed and an employee had to pull the belt stacker by chain hoist. A rebuild of the system was unavoidable,” says Alexander Gils, describing the problem.

The hall in Borth can temporarily store around 70 000 tons of salt. The conveyor system is located at a height of 20.7 m and has an approx. 70 m long travel path. With a conveying capacity of 500 t/h, it handles around 1 million tons of salt within a year, which corresponds to around 37 000 truckloads. High plant availability is therefore essential. To optimize process reliability, the new belt spreader drive system had to be robust against salt and moisture. Alexander Gils found what he was looking for with RUD and its Tecdos products.

Salt and moisture: no problem for the Tecdos drive system

The principle of the Tecdos drive system from RUD, which is in use at the conveyor system in Borth, is as simple as it is revolutionary: The Tecdos Omega Drive is attached to the SEW motor of the system and pulls itself along the horizontally tensioned Tecdos round link chain over the entire travel distance of around 70 m and it moves the belt stacker along the entire length of the conveyor. In this way, it moves the belt stacker back and forth. The RUD divisions worked closely together for the construction and design of the components: The RUD System GmbH team took over the coordination and lead management of the project, prepared the manufacturing and assembly documents and took over the purchasing of the components. The specialists from RUD Ketten, in turn, were responsible for the design and manufacture of the chain components. Herfurth & Engelke Förderanlagen GmbH took over the manufacturing and assembly of the new system.

“Compared to other drive types, such as rack and pinion, spindle drives or roller chains, our Tecdos system is robust against aggressive media and harsh weather conditions. It is also predestined for use in salt storage facilities in particular. Damp fine salt is slippery, and wheels tend to lose their grip and slip. However, the Tecdos Omega Drive in combination with the round link chain keeps running,” explains Managing Director René Heimlich, who is responsible for project coordination, design and component purchasing at RUD System GmbH.

Driving at a dizzy height

One challenge in the construction of the conversion was the limited space available and the statics at a height of 20.7 m. “The motto was: as big as necessary, as small as possible,” emphasizes Alexander Gils. For the drive, RUD chose its second smallest drive in the Tecdos Omega Drive series, the Omega Tec 12 with 12 kN tensile force. It scores with its compact dimensions of 280 mm x 102 mm x 250 mm (L x W x H) with a net weight of 22 kg.

The chain on the belt stacker is a RUD Tecdos round link chain Premium made of case-hardened steel. “We deliberately did not choose a stainless round link chain. For one thing, our case-hardened round link chain is more durable and also works despite corrosion. For another, we would not have been able to maintain the compact dimensioning otherwise,” explains Heribert Herzog, application engineer at RUD Ketten and responsible for the design of the chain drive.

Everything from a single source: from components to steel construction

The height at which the system is installed in the warehouse was also a challenge for the professionals from Herfurth & Engelke. “We had three fitters in harnesses up there at a good 20 m height. That’s a bit more demanding in terms of occupational safety, and it also costs more time during installation. But everything worked out excellently,” explains Olaf Uminski, Managing Director of Herfurth & Engelke Förderanlagen GmbH, which is also part of the RUD Group. In addition to the installation of the new drive system, the specialists for the conversion of existing plants also took over the manufacture of brackets, operating platforms and steel construction components. 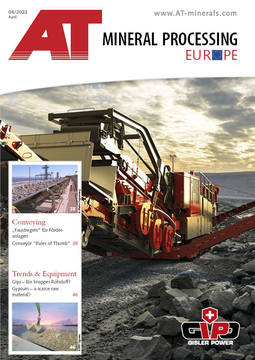 Minimum effort, maximum service: this is what RUD offers its customers with the new RUD Remote Service. Immediately available help  independent of location and 100 % contactless. Service and...

H?igh belt speeds represent a challenge for scrapers. Cleaning results are often less than satisfactory. But that is not always the case, as you can see at the opencast lignite mine in...