Hillhead 2012 will take place at the usual venue (Fig.) – Tarmac’s Hillhead Quarry, Buxton/UK from 19.‑21.06.2012, with leading international exhibitors displaying their latest plant, equipment, materials and services for the minerals and construction industries.

With six months to go before the opening of Hillhead 2012 some 350 exhibitors had already signed up by Christmas to participate in this major event, such as Volvo, Sandvik, Metso, Terex Group, Finning/Caterpillar, Liebherr and Bell Equipment. Another four major suppliers of excavators, loading shovels and other types of heavy construction equipment have also confirmed their stand reservations at the exhibition. The Korean duo Doosan and Hyundai will be returning to the show after an absence in 2010, while Case, long-standing supporters of Hillhead, will be back in their usual spot at the quarry face end of the site with their asso­ciates New Holland at the other end of the block. Event director Jack berridge noted that 97 % of the outdoor stand space has been sold.

Regular visitors to Hillhead will notice a difference on arrival at the entrance to the show next year because the familiar concrete block plant operated by Forticrete since the early 1980s has disappeared. The plant was closed as a result of falling demand for building materials caused by the recession which started in 2008 and has recently been demolished and the site area cleared. Accordingly, site owners Tarmac have given permission for area to be used for show purposes and some extra plots will be available for exhibitors adjacent to the Registration Pavilion. Event Director, Jack Berridge noted that ‘As the outdoor stand space was already virtually sold out, the extra area would be useful. The main benefit, however, would be that a second roadway was being constructed to provide a one way system for vehicles entering and exiting the site which would both assist traffic flows and road safety’.

www.hillhead.com
This article appeared in 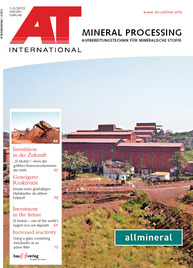 With 5 months to go, the organizers of Hillhead have released the 2018 exhibitor list, which is available to view online at www.hillhead.com/exhibitors. A double expansion to the Registration...

The organizers of Hillhead 2010 report that to date, almost 90 % of stand space has already been booked by some 300 companies, including most of the major suppliers to the extractive and heavy...

The organizers of Hillhead 2010 report that to date, almost 90 % of stand space has already been booked by some 300 companies, including most of the major suppliers to the extractive and heavy...

Hillhead set to expand again in 2018

The 2016 event hosted a record 476 exhibitors and enjoyed a 7.1?% show-on-show increase in attendance with 18?601 unique visitors from 71 countries making the trip to Hillhead Quarry, near Buxton,...