2010 is the year of the largest events and fairs worldwide supported by a generally optimistic mood both on the part of the exhibitors and the visitors. Thus, the bauma 2010, the first major event of this year, already marked a “Change in trend for the international construction machinery and equipment industry” (p. 19-20) even if the fair only really got going in the second half of the week because of the flight ban due to the volcanic ash cloud.

The POWTECH 2010 was also a success. It took place together with the TechnoPharm 2010 and the World Con-gress on Particle Technology (WCPT 6) in Nuremberg directly after the bauma 2010. In a special issue of AT INTERNATIONAL in April we had already informed you in advance about this fair. Also here the organizers gave a positive report after the fair week. They emphasized the good atmosphere that became apparent not least in an increasing readiness to invest of the part of the specialist visitors.

A continuation of the new optimism can also be seen as Hillhead 2010 approaches – the next major event for mining and quarrying which will take place from 22 to 24 June 2010, and which had been postponed for one year due to the economic and financial crisis. Many more than 400 companies have registered to present their latest ­developments and, amongst other things, with live demonstrations, to convince experts of the excellence of their products.

Will the positive development of the market continue? We will keep you informed! 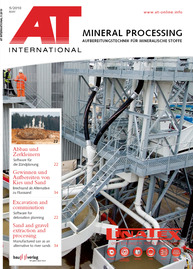 Positive result for POWTECH and TechnoPharm 2014

POWTECH and TechnoPharm 2014 can be summed up positively after three days of productive exhibition activity and knowledge transfer. With altogether 929 exhibitors from 30 countries and some 15?000...

The Exhibition Centre Nuremberg invites the industry to POWTECH again from 30 September to 2 October 2014. The 2013 event once again consolidated its position as World-Leading Trade Fair for...

POWTECH is consolidating its position as the worlds ­leading exhibition for mechanical processing technologies and instrumentation. The marked growth of 16 % for visitors (Fig.) is a clear sign of...

The world in Nuremberg

This years organization of the three highly international events  POWTECH, TechnoPharm and the World Congress on Particle Technology (WCPT6)  in parallel made the Exhibition Centre Nuremberg...

Following a review of the Government roadmap to ease COVID-19 restrictions announced on 22 February, The QMJ Group has made the decision to postpone Hillhead by 12 months. Hillhead event director...