In late June 2010, the new Hitachi EX1900-6 was set to work at the quarry of the Hirschau/Schnaittenbach kaolin works owned by Amberger Kaolinwerke. In a cutting and loading operation, the 190-t excavator with backhoe bucket is used to extract raw kaolin, which is then processed and refined on site. Raw kaolin is a fine, iron-free white rock, containing kaolinite, a product of weathered feldspar, as its main component. The largest buyer of kaolin worldwide is the paper industry. Around two thirds of the kaolin produced worldwide is supplied to this sector.

One of Europe’s most important kaolin, silica sand and feldspar deposits is located in the Hirschau-Schnaittenbach Basin. Industrial minerals have been extracted at Schnaittenbach since 1833 and at Hirschau since 1901. In 1993 the two plants were merged to form the Amberger Kaolinwerke, which became a subsidiary of Quarzwerke GmbH, Frechen, a few years later. State-of-the-art technologies are employed to efficiently separate the raw material into the industrial minerals kaolin, feldspar and quartz in a complex classifying process.

When it came to buying a new excavator for the extraction of the raw kaolin, Amberger Kaolinwerke opted for a Hitachi EX1900-6 supplied by the German-based distributor Kiesel. The EX1900-6 is one of only few 200-t excavators currently in operation in Germany. It took five Kiesel specialists a week to put the individual parts together. The 1 086-HP Hitachi EX1900-6 with 8.30-m BE-boom and 3.60-m BE-arm works on a 5.60-m-wide undercarriage with 800-mm-wide shoes. Key features of the Hitachi machine are its exceptional hydraulic function, which guarantees fast and highly productive loading, as well as a top-quality undercarriage, revolving frame and drive chain, ensuring cost-efficient operation over a long lifetime. In addition the comfortable cab and numerous operating and safety improvements help make operation and maintenance even simpler.

Another lorry was necessary to transport the 16.5-t rock cutting bucket from LOC-matic, which, with its dedicated design and the high-strength materials used in its construction, promises first-class cutting forces and extremely high fill-up. The reinforced inner bar absorbs the forces at the protruding central tooth, which are generated during extreme cutting and breaking (Fig.). The 85SV2 teeth system from Esco, one of Kiesel’s system partners, was coated with a layer of tungsten carbide for this application and im­presses with its high wear-resistance and exceptional cost efficiency. 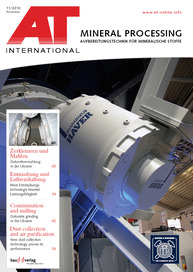 Dear Readers The bauma issue is certainly one of the highlights of the year. Just the scope and weight of the issue are an indication of that. Many companies have participated in our preview and...

Hitachi Construction Machinery Europe NV (HCME) expanded its popular range of wheeled loaders by the three new types ZW330, ZW370 and ZW550. These wheeled loaders from Hitachi are the first ones...