In 2010 STEINERT recorded the highest turnover in its company’s history and, with the highest level of incoming orders for three years, started successfully into the new business year 2011 (Fig.). STEINERT’s success in 2010 was thanks to its sustainable investment in new product series and in a further expansion of the company’s sales activities during the crisis. The company has also moved closer to its customers with improved services when providing spare parts and commissioning new systems. The ­customers – plant constructors, recycling companies, end customers, planning offices, etc. – have also received more in-depth advice in the selection, application and combination of STEINERT sorting solutions.

Thanks also to the successful integration of RTT STEINERT in the STEINERT Group, it has been possible to effectively implement projects worldwide, enabling STEINERT to successfully position itself on the market as a full-range supplier. STEINERT also continued to live up to its role as a leader of innovation in 2010. Special sorting applications gave rise to new technologies. For example, the X-ray sorting system XSS® F opens up completely new sorting possibilities. Arma­tures ranging from the smallest copper “meatballs” through to heavy windings weighing several kilograms can be recognized and separated by our newly developed blow-out unit. The online object recognition of the 3D sensor also makes entirely new separation applications possible, such as separating different minerals, and even sorting insulated cables out of a mixture of materials. The 3D form recognition is independent of the colour of the target object, and black objects are also recognized reliably. 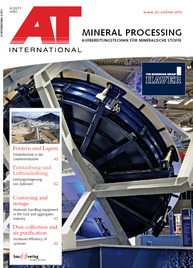 Sorting specialist STEINERT to change its name into STEINERT GmbH

For years now, the company has not only been known for separation solutions that use magnet technology, but also for sensor sorting machines. As a result, the companys name will no longer include...

125 years ago the foundation stone was laid for the success story of Steinert Elektromagnet GmbH, the company that supplies separating solutions for recoverables and impurities. This presented a...

In 2018 an industrial mineral mine in central Mexico installed its first Steinert ore sorter to improve the run of mine grade, which had gradually been decreasing with the aging of the mine. This...

On 31.03.2011 Germanys Federal Ministry of Economics and Technology honoured the cooperation partners RTT STEINERT GmbH and inno-spec GmbH with the ZIM Prize 2010 for the development of a new,...