CoalTek Inc., a Massachusetts-based clean energy company that uses proprietary technology to create highly efficient and environmentally friendly clean coal from low-value brown coal (Fig.), announced that its clean coal processing facility in Inner Mongolia has received final approval from all requisite regulatory and governmental authorities in the People’s Republic of China (PRC). The company will build large microwaves to the north of Beijing in Inner Mongolia. The industrial-sized microwaves zap low-grade coal (lignite & sub-bituminous), evaporating water inside the coal, resulting in drier, easier to burn coal with higher energy content. Before entering the microwaves, the low grade coal may be valued at roughly 30 to 40 US$/t. Thereafter, the value could be as high as 60 to 70 US$/t. This project is unique because of the technology implemented, but also because it‘s estimated that China puts a new coal power plant on line every two weeks.

CoalTek’s approval marks the first successful completion of the rigorous PRC environmental review and engineering examination by a clean coal technology company. Total investment in the Joint Venture (JV) project is expected to exceed 2.4 billion RMB – more than 350 million US$. The facility will initially produce 10 million metric t of processed high quality fuel per year, transforming low-grade brown coal into high-thermal value coal that burns more efficiently and produces lower emissions. In anticipation of future demand, the facility has been designed with infrastructure that will allow for seamless expansion beyond the currently planned scale.
www.coaltek.com 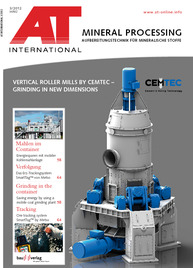 FLSmidth and Northern Heavy Industries Group Co., Ltd (NHI Group), based in Shenyang/China, have signed an agreement to enter into a joint venture  with an equal amount of shares  for the design...

1 Development of the coal industry In the primary energy consumption statistics, the worldwide consumption of coal has increased since 2002 at an average annual rate of 5.4 %, compared to 3.1 % for...

The Austrian pyroprocess specialist A TEC and the Brazilian combustion company GRECO have decided to join forces to bring global solutions to the pyroprocess in cement plants (Fig.). The technologies...

The Austrian pyroprocess specialist A TEC and the Brazilian combustion company GRECO have decided to join forces to bring global solutions to the pyroprocess in cement plants (Fig.). The technologies...