1‌ Identifying the true cause

The majority of problems involving rubber conveyor belts seem to have quite an obvious cause. As a result, the solution appears to be equally as obvious. However, if the diagnosis of the cause is incorrect then so will be the solution. The most common example of this is rapid wear of the covers of the belt, especially the top cover because proportionately it wears four times faster than the bottom cover. The most obvious cause of rapid wear would logically be the abrasive nature of the materials being conveyed, which is true up to a point. Increasing the thickness of the covers would therefore seem to be the easiest way to improve belt life. However, experience proves that this is rarely the best course of action.

Without a shadow of a doubt, the biggest single cause of rapid belt cover wear is due to the rubber having insufficient resistance to wear. In other words, the rubber compound used by the manufacturer has not been engineered to provide the level of wear resistance needed for the job. It is important to bear in mind at this stage that when comparing abrasion test results, higher figures represent a greater loss of surface rubber under testing, which means that there is a lower resistance to abrasion. Conversely, the lower the figure the better the wear resistance.

The manufacturer may claim that the rubber meets DIN Y (ISO 14 890 L) standards for abrasion resistance (maximum volume loss in cubic millimeters of 150 mm³ under ISO 4649 / DIN 53 516 test methods). However, in reality, the wear resistance may only be borderline at best or, as can be regularly found during laboratory testing, be totally inadequate. One example only recently found was a steelcord belt with an abrasion resistance of 264 mm³. Not only is that more than 50 % higher than the maximum level for DIN Y compliance, the manufacturer had sold the belt on the basis that it was a DIN W specification, which demands a maximum of 90 mm³. In reality, the belt actually had an abrasion resistance level that was more than three times less than it should have been.

Although it is generally true that thicker covers would endure more wear, the downside is that the added weight will increase the absorbed motor power of the system. Over the whole lifetime of the belt, this can amount to significant added cost.

It is also important to bear in mind that the ability of a belt cover to withstand wear is not due to its “abrasion resistance” alone. The wear resistance of rubber is a combination of its overall strength, its resistance to abrasion and its resistance to cut and tear propagation. If the latter is very low then a small, seemingly insignificant area of damage in the extra thick cover can easily increase due to the continuous material loading and the relentless flexing of the rubber around the drums and pulleys. In time, this damage will connect to another area of damage and consequently a small piece of damaged rubber will effectively be cut out and lost rather than simply worn off.

The fact is that although doubling the cover thickness will add some lifetime, it will certainly not double the lifetime of the belt. Invariably, the only real solution lies with improved quality rather than increased quantity. The professional advice is to only buy belts where you are totally confident of their provenance (manufacturer’s origin) and where the manufacturer clearly states the level of anticipated performance rather than simply claiming to be have been tested to a certain DIN or ISO standard.

When problems are being caused by impact damage and/or ripping and tearing, there is often the temptation to fit a belt with a higher tensile strength and/or a belt with an increased number of plies. An example of this: despite fitting a 1000/5 belt to a 55 m primary conveyor in a quarry handling Gabbro stone, the belt was still only lasting an average of 600 hours. The same “solution” is often attempted when there are problems such as too much elongation (stretch), repeated splice failure or where mechanical fastener retention is poor. To be fair, increasing the tensile strength can be worthwhile (provided the design of the conveyor allows it) if the damage to the current belt is due to insufficient load support. The same applies to belts that are obviously under-specified in the first place.

5 The negative effects of increasing the tensile strength

Simply increasing the tensile strength or the number of plies can cause more problems than it solves. First of all, the belt becomes heavier and less flexible in both length and width. Reduced longitudinal flexibility usually necessitates an increase in the diameter of the drive pulley. Increasing tensile strength by just one step usually means an increase in diameter of 25 % or more. Failure to increase the pulley (drum) diameter can lead to dynamic stress failure, especially in splice joint areas. Reduced horizontal flexibility causes a decrease in troughability. Last but not least, and as with increasing the thickness of the covers, there is also a price to pay in terms of increased power consumption, which can be quite significant.

In all cases, before any change of belt is considered, it is advisable in any case getting a completely new belt calculation by using a professional belt calculation program. And if there is a piece of spare belt available then it is often a good idea to send a square meter of it for laboratory testing to measure its true tensile strength.

There are two reasons why this is advisable. In belts that have low quality (low cost) fabrics, it is unusual to find a fabric that has inadequate tensile strength. However, although the amount of material used in the longitudinal strands of the fabric may be adequate, the amount of transversal weft material is often kept to an absolute minimum in order to reduce cost. Although the required tensile strength might be achieved, rip and tear resistance is reduced and elongation (stretch) is low. Low elongation may sound good in principle but if the elongation is too low then this can cause problems with transition distances and a general inability to accommodate the contours of the conveyor and its drums and pulleys. Ultimately, this can lead to the premature failure of the belt.

7 Not what they seem

The second reason for checking the true tensile strength of a belt before replacing it is that it is becoming increasingly common for some manufacturers, traders and importers to supply belts that have totally polyester (EE) fabric plies in a carcass that is declared as being an EP (polyester/nylon mix) carcass construction. The simple reason for this deception is that EE fabric costs some 30 % less than EP fabric. In itself, this may not seem like a great deal but the fabric plies are a major cost component in any multiple ply conveyor belt so using the much cheaper polyester fabric is a big help when trying to achieve the perception of a lower ’like for like’ price. The whole basis of using a mix of polyester and nylon fabric is that it has the best balance of mechanical properties including allowing a conveyor belt to run straight and true, to trough, to flex round pulleys and drums, stretch, transversal rigidity, longitudinal strength and much more besides.

The use of totally polyester (EE) fabric compromises a whole range of essential mechanical properties. The biggest danger is that a polyester weft can cause low transverse elasticity, which reduces both the troughability and impact resistance of the belt and also causes tracking issues. In addition, less weft in the belt can also reduce rip resistance, fastener strength and the ability to cope with small pulley sizes. The seriousness of the detrimental physical effects for the end-user are therefore huge. One test witnessed recently revealed that the tensile strength of the carcass was more than 20 % lower than the specified minimum. To sum up, simply replacing a belt with one with a specified higher tensile strength and/or an increased number of plies is most often merely compensation for poor quality rather than a genuine and honest lack of (tensile) strength.

For multi-ply belts on conveyors where impact, ripping and tearing is a problem, the advice for the best and most cost-effective solution is often to fit a conveyor belt that has been specifically engineered for the purpose. Belts such as steel reinforced or Dunlop UsFlex and Dunlop Ultra X can have several times the resistance against ripping and tearing and cope with the impact of heavy objects falling from a high drop height much more effectively compared to belts that use a conventional fabric ply construction. As with the solution to premature surface wear, operators should only buy belts where they are as sure as they possibly can be of the quality, the provenance and the integrity of the supplier. Genuine quality always pays for itself but bigger is certainly not always better.

Leslie David is a freelance writer and business consultant based in the UK. Having worked in logistics management for 23 years, Leslie David has spent the last 15 years working and specialising in the European conveyor belt industry. During this time he has become one of the most published authors on conveyor belt technology worldwide. 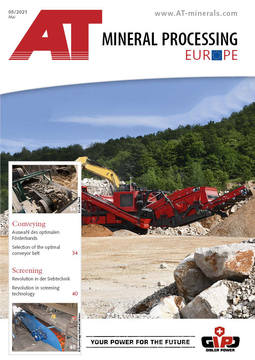 Optimising life cycle and efficiency of products and manufacturing processes

There has been enormous media interest surrounding the United Nations COP 26 meeting held in Glasgow in November 2021. The threats posed by climate change to the future of our planet and our way of...

The mechanical demands on steel cord bucket elevator belts are fundamentally different to those of belt conveyors. High tensile and pull-out strength on cords with small diameters are equally decisive...

1. Belt Conveyor is Closed Up The combustion of brown coal from the Maritsa mining area produces large quantities of ash. This must be taken away and deposited with the overburden of the open...

The system supplier Rema Tip Top is significantly expanding its conveyor belt business. Thats why the company has brought aboard a sales professional with many years of international experience in...