There has been enormous media interest surrounding the United Nations COP 26 meeting held in Glasgow in November 2021. The threats posed by climate change to the future of our planet and our way of life are to be taken seriously. Concerted and genuine efforts are needed, not only by world leaders but also by every industry, company and individual. Several years before it became ‘fashionable’ from a company image point of view, Dunlop made a conscious decision to pursue environmentally friendly strategies. This focussed on three key areas; product life cycle, the environmental impact of products and production processes.

To fully appreciate why the length of the life cycle of rubber conveyor belts is so important it is first necessary to understand the background. Rubber constitutes at least 70 % of the material mass of both multi-ply and steelcord belts. Because of its adaptability, most of the rubber used in conveyor belting is synthetic. Relatively little natural rubber (NR) is used, which is important because natural rubber production from the rubber tree (Hevea brasiliensis) is a leading cause of deforestation in mainland Southeast Asia.

The most commonly used type of conveyor belt are rubber ‘multi-ply’ belts, which make up some 85 % of industrial conveyor belt used in Europe. This type of belt has multiple layers of polyester/nylon (EP) fabric that are used to create a sturdy carcass. This, in turn, is protected by a thick outer coating of rubber. Most multi-ply belting will have between two to four layers of fabric. This means that some 45 000 km of non-biodegradable polyester and nylon fabric is being created and ultimately discarded every year, which is more than the circumference of our planet.

The raw materials such as polyester/nylon fabrics and the components used to create synthetic rubber are pretty much all directly or indirectly derived from crude oil. In fact, a typical conveyor belt is effectively 45 % oil. One ton of scrap rubber will usually contain some 500 l of oil.

In Europe, nearly 95 % of all used car tyres are now recycled. By comparison, the amount of used conveyor belting being recycled is believed to be less than 10 %. There are many reasons for this disparity. Recycling conveyor belts is an appreciably slower, more complicated and expensive process. There is also much less demand for the polyester and nylon fabric inner plies and certainly no practical use for the metal cables found in steelcord reinforced belts. Under foreseeable market circumstances, recycling industrial conveyors is not only ecologically problematic, it is also not viable. This is precisely the reason why producing and using conveyor belts that have the longest possible working life is now more important than ever before.

Quite typically, operational lifetime of conveyor belts can be double the usual lifetime. In the case of imported belts it can be easily assumed three or four times the service life. On this basis, the amount of belting that needs to be manufactured simply to replace worn-out belting could be reduced by up to 50 %. This also means that the amount of belting that has to be discarded could also be halved. The impact this could have on the environment is truly amazing. This kind of reduction represents some 75 000 tons of conveyor belting that would not need to be made and transported thousands of kilometers each year. It would also mean that some 75 000 tons of rubber, polyester, nylon and all the associated chemicals would not have to be disposed of, most of which would be buried in the ground.

Concerning transport, the average modern day container ship produces the equivalent of 16.14 g of CO2/t of goods shipped per kilometer. The average distance between Asia and Europe is in excess of 6000 km. This therefore means that some 100 kilos of CO2 is emitted into the atmosphere for every ton of imported conveyor belt. As a consequence, companies should therefore change their purchasing strategy and buy belts that are manufactured close to their operations.

If instead of low-quality “economy” belts higher-quality and longer-lasting belts are purchased – albeit at a higher up-front price – this will create two significant benefits. Firstly, it would be an enormous help environmentally, and secondly, it will also reduce the medium to long-term costs for the user, as the whole life cost would be significantly reduced. Conveyor belt purchasing policy should therefore focus on the lowest lifetime costs.

3 The environmental impact of products

Another aspect that Dunlop focusus on are the chemicals and ingredients used to create rubber and the lasting environmental impact that they could have on the environment – both in the short term and in the future. There are literally hundreds of different chemical components such as anti-degradants, anti-ozonants and accelerators. These include primary amine–based sulfenamides such as N-cyclohexyl-2-benzothiazole sulfenamide, and thiazoles, such as 2-mercaptobenzothiazole. It is an inescapable fact that to make some rubber compounds it is necessary to use chemicals that are extremely dangerous in their own right. Fortunately for us all, at least as far as Europe is concerned, control mechanisms are already in place because there are very strong regulations designed to protect humans, wildlife and the environment in the form of REACH.

Among other things REACH also calls for the progressive substitution of “substances of very high concern”(SVHC’s) when suitable alternatives have been identified. In addition, the REACH regulations regarding SVHC have become increasingly stringent and demanding. For example, Article 31 of REACH (requirements for safety datasheets) demands that if a product contains SVHC that is more than 0.1 % of the total weight of the finished product then the manufacturer is compelled to both register its use with the European Chemicals Agency and provide their customer with a safety datasheet. As Dunlop manufactures its own rubber and produces each belt itself, it is relatively easy to comply with these stipulations – because the company has full control over everything that happens.

It is worrying that the majority of belts used in Europe nowadays is imported so it is virtually impossible to know how much SVHC and Persistent Organic Pollutants (POPs) such belts contain. Manufacturers located outside of EU member states and the UK are not subject to REACH regulations or even to EU regulation concerning the use of Persistent Organic Pollutants (POPs). This means that they are free to use unregulated raw materials even though those same materials may be entirely prohibited or at least have strict usage limitations within Europe. As a consequence, manufacturers or suppliers of the belts should always confirm in writing at the time of purchase that they have been manufactured in accordance with the REACH Regulation EC 1907/2006.

Manufacturing industrial conveyor belts uses a lot of energy and raw materials and therefore produces a large carbon footprint. Reducing the size of that carbon footprint by any significant amount in the short term is extremely challenging. However, there are things that can be done.

The production process used to manufacture rubber industrial conveyor belts has not changed fundamentally for a great many years.Consequently, much of the machinery is old and not always as energy efficient as it could be. Particularly during the past decade, Dunlop have invested many millions of euros replacing outdated machines and building new production lines using the most technically advanced equipment available. This meant an added incentive because anything that reduces the company’s carbon footprint by increasing efficiency also improves the overall efficiency of the business. The steelcord production line of Dunlop is a good example of this because it combines what were previously separate production stages into one smooth process. Apart from the product quality benefits, this also means that it uses less energy.

The demands being placed on modern day conveyor belts, especially those used in ‘heavy industry’ such as quarrying, mining, wood and waste for example, mean that belts have to be stronger and tougher than ever before. Traditionally, this has meant making belts with multiple plies, so they are becoming increasingly heavy. Naturally, thicker, heavier conveyor belts contain a lot more rubber and fabric. There is therefore a parallel increase in the carbon footprint and ultimately, an increase in potentially unrecycled waste. However, this upward trajectory is avoidable.

Despite increasingly thicker, heavier belts, it is estimated that up to 80 % of conveyor belts are scrapped prematurely due to damage. The challenge presented to the Dunlop R & D team therefore consisted of two major objectives. Firstly, to design a belt that was much more capable of resisting impact, ripping and tearing. Secondly, to make sure that the belt could be competitive in the market. The answer to the pricing issue lay in the volume of raw materials needed and the complexity of the production process. Since engineers and technicians at Dunlop had already developed extremely hard-wearing, long lasting rubber cover compounds, they concentrated on the carcass construction.

Instead of persisting with the multiple ply carcass construction, a single ply carcass was developed using an amazingly tough patented fabric that is exclusively made in Dunlop’s sister company’s in-house fabric weaving facility in the USA. The specially woven fabric uses crimped warp polyester yarns to provide high strength and low stretch combined with strong ‘binder’ and ‘filler’ yarns to create strength and stability under load. The result was Dunlop Ultra X, a unique single-ply, super-strength belt that has more than 3 times greater longitudinal rip resistance, up to 5 times better tear resistance and a far superior resistance to impact compared to traditional 3-ply or even 4-ply belting.

From a production point of view, having a single-ply construction helps to maximise efficiency because there are fewer calender runs. Another advantage is that having no rubber skim between the plies not only results in a thinner, stronger carcass that is less prone to delamination, it also reduces the amount of rubber needed thereby keeping the cost down. Yet another advantage was the ability to make longer production runs at maximum width, which further maximises production efficiency and minimises the amount of power consumed.

Single ply solid woven belting has been used in underground mines for several decades. Replacing thick, multi-ply belts with single ply belts that are much more durable and long lasting yet use so much less energy is certainly a good way forward in every respect. Therefore, in the case of belt damage, the possibility of using a single-ply conveyor belt instead of a thicker and heavier belt that provides the required tensile strength and resistance to accidental damage should be investigated. This will lead to extended operational lifetimes and consequently less waste in every respect.

After completing his studies in Chemical Technology in 1984, Andries Smilda joined Dunlop Conveyor Belting, where he has worked ever since and has become one of the most experienced senior managers in the conveyor belt industry. 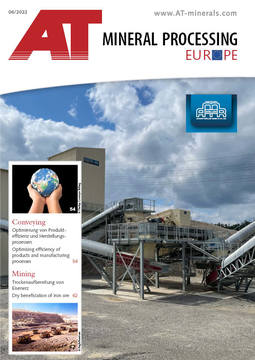 Aspects to consider when selecting the optimal conveyor belt

1? Identifying the true cause The majority of problems involving rubber conveyor belts seem to have quite an obvious cause. As a result, the solution appears to be equally as obvious. However, if the...

Are your conveyor belts safe to handle?

W?hen REACH (Registration, Evaluation and Authorisation of Chemical substances) regulation EC 1907/2006, first came into force in June 2007, it is fair to say that it largely went unnoticed by the...

D???unlop has launched the Dunlop Belt Buddy App, specifically designed to enable users quick and easy access to technical guidance and calculation tools. The App also contains full details of on the...