Recently dsb Maschinenbau GmbH delivered two units of INNOCRUSH 35 to Sia “STREK” in the port terminal of Riga/Latvia (Fig. 1). The company with its own port terminal, which was established in 1991, offers various services, such as crushing, screening and purifying of coal. Sia “STREK” was ISO certified already in 2004. The two INNOCRUSH 35 units delivered now will be used in the port terminal of Sia “STREK” to crush coal (Fig. 2) that is supplied in open wagons from Siberia. The crushed coal is directly loaded on to vessels and supplied to the EU, predominantly to Germany, France, Spain, Belgium and the Netherlands. In particular, the coal is used in caloric power plants and in the steel industry. The machines are equipped with an elevated hopper wall ensuring an optimum feed of the plants by means of the existing crawler excavator with a capacity of 9 m³.  Furthermore, the INNOCRUSH 35 units are equipped with stronger magnets to be able to separate immediately the high portion of foreign matters, such as iron, during the crushing process. In addition, the impact mills are equipped with a more rugged control cabinet. The main discharge belt can be adjusted to two speeds (double belt speed) to be able to discharge optimally the enormously high amount of crushed material. 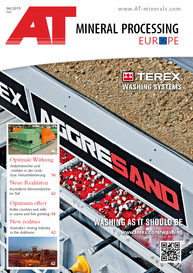 The first newly developed innocrush 35 including oversize screening IS2 and a new design was sold directly at the bauma (Fig.) due to the positive response. The machine was delivered to the company...

At this years ­Stein­expo 2011, dsb Maschinenbau GmbH, the Austrian machine engineering company based in Linz, presented the INNOCRUSH 30, which is equipped with an even longer main discharge belt...

FLSmidth has signed an EPS (Engineering, Procurement and Supervision) contract worth more than 160?million? with the Russian marine export terminal owner OTEKO-Portservice LLC for the engineering,...