At this year’s ­Stein­expo 2011, dsb Maschinenbau GmbH, the Austrian machine engineering company based in Linz, presented the INNOCRUSH 30, which is equipped with an even longer main discharge belt and now has a discharge height of 3.2 m. The operation- and service-friendliness have been enhanced with the fully hydraulically lowerable main conveyor belt and the hydraulically foldable motor housing. The show crusher was sold at the exhibition itself and delivered straight after the event to the new owner, Schotterwerk Brugger GmbH, in Dürbheim/Germany.

Founded in1947, the company, now run by the third generation of the company, produces crushed stone, sand and chippings. Lorenz Brugger took over the company in 1985 and built it up to a modern, efficient facility with computer-controlled equipment. In 1991 Leander Brugger joined the company and became the new managing director in 1997. Since 1998 ready-mix concrete has also been produced at the Dürbheim site. The soil and mineral construction waste landfill rounds off the company’s portfolio. Mobile crushing is naturally a recurring issue. The acquisition of a new mobile crusher had been under consideration for some time. As the standard package of the new INNOCRUSH 30 already features a metal separator (magnet belt), water spraying system for suppressing dust, remote control, side discharge belt and a service technician for training, the deal was sealed at the trade fair. The crusher was delivered to Schotterwerk Brugger direct from the exhibition site and has already been used on some first jobs (Fig.). It is currently used to crush soft rock with a feed size to 500 mm.

In addition dsb Innocrush has developed a new drive concept that fits in perfectly with its proven line of simple, rugged and reliable machinery.

www.innocrush.com
This article appeared in 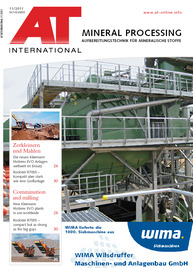 dsb Maschinenbau GmbH, a renowned company with headquarters in Linz/Austria, has specialized in the development and manufacture of mobile crushers with top performance and a throughput of 100?t/h up...

An innocrush 50 impact mill was recently supplied by dsb Maschinenbau GmbH recently to an application that demanded absolute reliability and optimum performance. The challenge was 30?000 railway...

Reichardt Recycling was founded in 1999 by Christian Reichardt  with one mobile crusher as its foundation stone. Since 2004 the company has also operated a building rubble disposal and recycling...

Recently dsb Maschinenbau GmbH delivered two units of INNOCRUSH 35 to Sia STREK in the port terminal of Riga/Latvia (Fig. 1). The company with its own port terminal, which was established in 1991,...