Founded in 1948, the family-run company Sand Adler, today based in Schwaig near Nuremberg, extracts most different sand qualities at four locations (Dillberg, Gsteinach, Seelach and Mühlach). In the Dillberg mine near the small town of Postbauer-Heng in the southeast of Germany, so-called Dogger sand is extracted - a sand of highest quality with grain sizes of 0 to 1 mm, which is used exclusively as aggregate for the brick industry. The main customer is the brick manufacturer Wienerberger.

To loosen the sand, Managing Director Matthias Guttenberger decided to deploy a Hyundai hydraulic excavator HX330 NLC (Narrow Long Crawler, long small chain chassis with a total width of 2990 mm - ideal for road transport via low-loading trucks) with excavator buckets of 1.5 m³. The task of the excavator is to loosen the sand, which in places occurs as very hard chunks, and to break off lumps of sand to feed them to a separate mobile crusher.

“We looked for a powerful and economical excavator in the 30-ton class”, explains Guttenberg, “and this is where our cooperation with IBS Industrie- und Baumaschinenservice, the Hyundai dealer from Röthenbach, started, because the advice and service they offer suit us.” The excavator is in operation for 8 hours a day - thus 12 000 to 15 000 tons of sand are extracted per year.

Those who consider sand a homogeneous construction material are on the wrong track in the case of Dogger sand. The primeval material, which is caked during the sedimentation process, is very hard and can only be loosened by means of blasting or ripper tooth. Therefore, the bucket of the excavator is equipped with a special and particularly robust Esco tooth system. Sand Adler operates seven wheel loaders and now the 33-ton excavator at the four locations. Except for the winter break, this key equipment in the extraction chain works year-round.

With the HX series (operating weight 14 to 52 tons), Hyundai Heavy Industries introduces a newly designed series of modern, ergonomic and powerful hydraulic excavators. Stage IV engines as well as the novel design are just as convincing as the comprehensive new and further developments focused on cabin, components and operation. An important feature of all hydraulic excavators of the HX series is the cab interior, providing 13 % more space and a noise level lowered by up to 4 dB. It is a decisive design element, which gives the HX equipment a unique appearance with high recognition value.

The focus of the further development was put on the driver and his requirements regarding comfort and safety. The new ROPS-/FOPS cabin is mounted on particularly well insulated dampers, which significantly reduce the vibrations at the driver’s seat. The driver’s seat and the operating console with joystick form one unit, which automatically adapts to the driver’s weight.

The capacitive touch screen display was extended to 8 inches enabling the driver to set various parameters in clearly laid out and intuitively guided menu items. Two views and modes are retrievable. Beside displays and switches, also many settings can be very easily configured and adjusted with minimum expenditure. The large colored ECO display facilitates the driver’s work. Colored bars in the rev counter indicate the efficiency - the green bar means efficient work while, correspondingly, the red bar stands for high fuel consumption and wear. Three working modes, ECO, Standard and Power, are stored in the control unit and can be selected at the touch of a bottom.

Using a touch screen, oil quantity and pressure for up to 20 accessory devices can be stored in a library (Hyundai calls it the EPPR function, with EPPR standing for: Electronic Proportional Pressure Reduce Valve). For particularly demanding accessory devices, the hydraulic delivery rate can be increased by the interconnection of two pumps circuits - these configuration data along with the pressure and oil delivery rate are also stored in the Hyundai system: a particularly important feature in the mining environment, where operators permanently switch between hammer, scissors, pulverizers, sorting buckets and other devices.

The safety aspect is paramount to Hyundai products, thus the rear view camera is integrated as a standard feature. Hyundai offers the AAVM System (Advanced Around View Monitoring) as an option: here, the display shows a 360-degree panoramic view, consisting of the image data of four cameras mounted at the excavator. The IMOD monitoring system (Intelligent Moving Objects Detection), which is also available, detects objects moving around the excavator and visualizes them on the monitor. 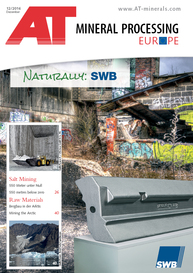 Front shovel excavator from Hyundai in the extraction of quartz porphyry

Construction Machine Training in the 21st century with Komatsu

Komatsu sets new standards in driver training. With a simulator equipped with state-of-the-art technology  here for a hydraulic excavator of the 30 t class  it is now possible to go through a...

Hyundai Construction Equipment Europe (HCEE) continues the roll-out of the A-series with the HX300AL, a 30-tonne Stage V-compliant crawler excavator. This new machine is the ideal workmate for...

The R 960 SME is a true 60-tonne crawler excavator. With its 70 tonne excavator undercarriage, it sets the benchmark in its market segment. The further development of the R 960 SME, which has already...

A new hydraulic track excavator (Fig.) was recently added to the fleet of machines at the Warstein-based company Westkalk. The house-high, red colossus with a weight of 70 t is used at Suttrop...