1 Introduction
The term “slag” is a metallurgical expression generally used to describe the non-metallic, mineral constituents produced during the extraction of metals from raw materials. The draft of DIN 4301 dated June 2008 differentiates between ferrous and non-ferrous metallurgical slag. The residue produced by waste incineration is also often referred to as slag, but, in accordance with this definition, this is actually ash, Nevertheless it will also be discussed in the following paper. The same applies to the aluminium salt slag produced during aluminium production and dross, which is... 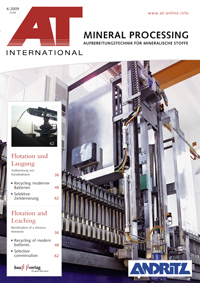 Metso and Magotteaux, Belgium, have signed an agreement to distribute Magotteaux special, composite type wear parts for impact crushers (Fig.) on an exclusive basis. The contract is valid on...