In winter 2010/2011, scheduled maintenance and repair work was performed at the mineral processing plant at Klöch Quarry (Fig. 1). During this work, considerable damage to the crusher in the third crushing stage was detected. No time was available to plan the necessary replacement and the associated investment. As the manufacturer of the crusher integrated in the work process up until then was not able to deliver in time, the long-standing partner Sandvik was approached. In addition to Sandvik’s ability to deliver immediately, the technical options and the result of the material crushing tests were so convincing that the decision to buy the Sandvik CH440 cone crusher was soon taken. The already long planned change in the process could now be implemented.

During a visit to the customer by the Sandvik field operatives around one year after commissioning of the new crusher (Fig. 2), the Managing Director of Klöcher Basaltwerke Adolf Weinhappl and Operations Manager Andreas Mahler confirmed: “The upper limit of the crusher’s capacity has not yet been reached. With the CH440 we still have some options open. With the investment in the new Sandvik cone crusher, we have less sand in our production. Moreover, the load to be handled by the downstream crusher has been reduced by 50 %.” On top of that comes the energy saving of around 240 000 kWh, at 1500 hours of operation per year, which is has been brought about by the Sandvik crusher, and the drastically lowered CO2 emission and the saving of 40 000 l diesel per year. Operations Manager Andreas Mahler finishes by referring to the reduction in wear by a half of the previous value, the 15-20 % higher productivity with higher throughput rate and size reduction made possible with the special hydroset gap adjustment system. In addition, the stable process thanks to the full automation and the lower maintenance requirement should be mentioned. 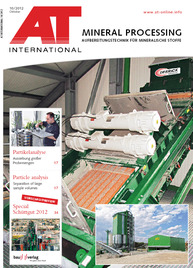 In recent years some of Koreas leading aggregates producers have started to invest in Sandvik crushing equipment. There were now further orders from Korean companies for CH430 and CH440 cone and...

The new Sandvik CS550 cone crusher launched at CONEXPO-CON/AGG is a powerful secondary stage crusher for 700 to 750-tonne applications. In addition to flexibility and sheer tonnage, it offers advanced...

The new Terex® high-capacity, all electric wheeled crushing systems are designed to deliver and built to last. Theyre quick to set up and dismantle, as well as easy to operate. The Terex®...

Leading quarrying companies are placing increasing emphasis on the highest possible standards for safe, efficient and productive operations. When these three aims were combined as the primary criteria...