Today, MAPEI is one of the global leaders in the manufacture of adhesives, seals and chemical products for the building industry. In November 2013, the company awarded the contract for the construction of a new mixing plant for dry building materials with a contract value of approx. 2 million € to the Austrian general contractor BT-Wolfgang Binder GmbH. The overall planning, construction, manufacturing and delivery of machines, silos and steelwork, including the façade was carried out by BT-Wolfgang Binder. The silos and the steelwork as well as chutes and containers were manufactured in Malaysia according to the statics and the production drawing of the general contractor.

The machines seaworthy packed in containers were forwarded to Malaysia by Koper (Slovenia). The assembly was carried out by service engineers and a supervisor from BT-Wolfgang Binder, supported by Malaysian personnel. The concrete foundation, the electrical equipment and the control were supplied by the customer.

In mid-October 2014, the plant was successfully handed over and production in Nilai – in the center of Malaysia – was started (Fig. 1). Due to the good cooperation with the customer in Malaysia and the engineering department of the MAPEI company in Milan under the direction of Dr. Guido Trussardi, the project manager Stefano Barsotti and the project department of BT-Wolfgang Binder, the plant could be put into operation and handed over in due time, despite great distances. With the hand-over to the customer, MAPEI has ordered another mixing plant from BT-Wolfgang Binder for dry building materials for Australia. 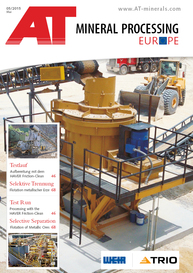 Russia places its trust in know-how from Austria

The company BT-Wolfgang Binder has set up for baumit a sand processing and mixing plant for building materials in Russia (Fig. 1) and has successfully entered the market as general contractor. The...

BT-Wolfgang Binder GmbH planned and realized the extension of the modular sand processing and mixing plant for Caparol in Belarus. At the beginning of the building season 2011, the building materials...

On 31.12.2010, the SGL Carbon GmbH, Meitingen/Germany has placed an order for two Loesche mills type LM 15.200 (Fig.) for the grinding of petcoke. The Loesche mills will be delivered and installed in...

In the end of February 2012, the Division Mineral Pro­cessing of the company MFL landed one of the biggest orders. For the Kombinat MagnezitSATKA, a stationary plant for the stowage complex...