Around 5000 visitors came to SOLIDS Dortmund & RECYCLING-TECHNIK 2014 at Westfalenhallen Dortmund on 21 and 22 May 2014 to do business with 393 exhibiting companies, to make contacts and to discuss specific projects. This represented a growth in both exhibitor and visitor numbers of 15 % compared to 2012.

“The trade-show duo presented itself with a new brilliance this year. The development of the stand concepts was a complete success. The new All-in Plus stand increased the overall attractiveness of the show’s image. Many exhibitors brought machinery to their stands and presented their products and innovations live,” said Daniel Eisele, Event Director, easyFairs Deutschland GmbH. “New show features such as the Business Bar in Hall 4, the VIP & Speakers Lounge, the four seminar forums with 60 technical presentations, the conference and the guided tours were moreover very well received and offered additional networking as well as superb education and training opportunities.”

A further highlight was the bestowing for the first time of the SES Award. Criteria for selection for the Award, which is given at the Solids European Series shows in Antwerp, Basel, Dortmund, Kraków, Rotterdam and St. Petersburg include the number of visitors invited by the exhibitor, clicks on the exhibitor’s online profile on the show website and the number of products in the exhibitor’s online profile. The winning exhibitor at SOLIDS Dortmund 2014 was AKO Armaturen & Separations GmbH from Trebur-Astheim. Managing Director Frederic Kopp accepted the prize, which has a value of € 1000 (Fig. 2).

Feedback from exhibitors and visitors alike was equally positive. “We exhibited for the first time at SOLIDS Dortmund 2014 because our customers are here,” said Udo Sekin, Sector Manager Heavy Industry, K.A. SCHMERSAL GmbH & Co. KG. “We have already achieved very good results on the first day. We managed to generate a variety of new customers,” Sekin continued. “SOLIDS Dortmund is an event format like no other in Germany. We are happy that we discovered it and have already signed up for 2015.”

The success of the trade show was also reflected in exhibitors’ bookings onsite for the next edition of the show in 2015. According to the organiser’s figures, by the close of the second day 172 exhibitors had already made firm bookings for their stand 18 months in advance of SOLIDS Dortmund 2015. 50% of the floor space in Halls 4, 5 and 6 is already taken. The dates are fixed for 4 and 5 November 2015 at the Westfalenhallen Dortmund.

In addition Hall 7 will focus on recycling technologies. “With the opening of Hall 7 for the co-located RECYCLING-TECHNIK we are giving this event a stronger profile and fulfilling the needs of the recycling sector,” said Daniel Eisele. “Already this year half of all visitors said that they were interested in recycling technology products. We also expect a further growth in exhibitors in this area in 2015.”

The SOLIDS Dortmund (SCHÜTTGUT) 2015 is part of the Solids European Series with 11 000 expert visitors and 1000 exhibitors. This is Europe’s largest system of bulk solids events at a total of six locations. 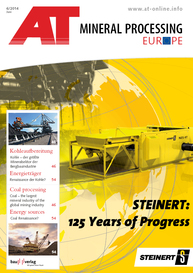 SOLIDS and RECYCLING-TECHNIK 2014 in Dortmund

Following SOLIDS and RECYCLING-TECHNIK Dortmund 2012, the sixth edition of the trade fair to be held from 21 to 22 May 2014 is on course on further growth: so far over 360 exhibitors have booked a...

W hoever is looking for problem solutions and the latest technologies in the bulk solids branch or recycling technology will find a platform at the trade fairs SOLIDS and RECYCLING-TECHNIK 2014 to...

On 6 March 2015 Artexis Easyfairs acquired the management of the Dry Bulk Conference & Exhibition from the publishers of Dry Cargo International. The event will henceforth be branded the Dry Cargo...

Due to the current corona situation, the trade show Solids & Recycling-Technik Dortmund will be postponed to 24th and 25th June 2020. In close cooperation with the City of Dortmund and the health...